10 Best Deadpool Cosplays That Get You ‘Wow’ You may find yourself being surrounded by all kinds of Deadpool cosplays If you happen to attend a convention recently. There are original Deadpools, lady Deadpools, kid pools and so on…The fact is anyone can cosplay as Deadpool and that’s exactly what makes it so popular.

The Deadpool Cosplay Costume is the most popular item on our sit by now, so we asked some of our clients who bought Deadpool Costume to kindly send us their feedback cosplay photos, and with all the photos we got, we ‘d like to bring out a list of 10 best  Deadpool Cosplays. You can comment on the end of the article and tell us which is your favorite, and we will send you a 5 dollars coupon to buy stuff on our site. 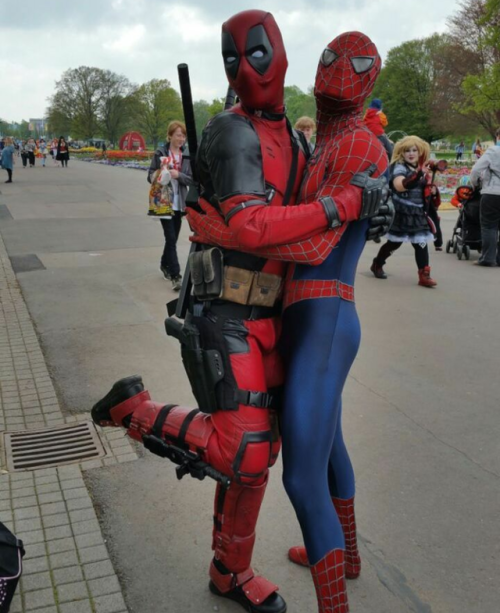 It seems that Deadpool always loves to hang out with Spiderman, right? Maybe because Deadpool once learned something from Spiderman and see him as an idol actually. There is a pet phrase Deadpool would say all the time, “ what would spiderman do in this case?’’ So it’s totally not weird that you would see Deadpool cuddling with Spiderman, LOL…You can see that Deadpool Costume has a lot in common with Spiderman one, both mainly in red and with a similar style. Not only costumes are similar, but they also have the character in common too: active mind and chattered mouth.

Why not try to bring the Deadpool Cosplay Costume home and team up with your Spiderman friend on next comic-con, you too together absolutely will get more attention than either of you separately.

2.Deadpool Cosplay who loves to read 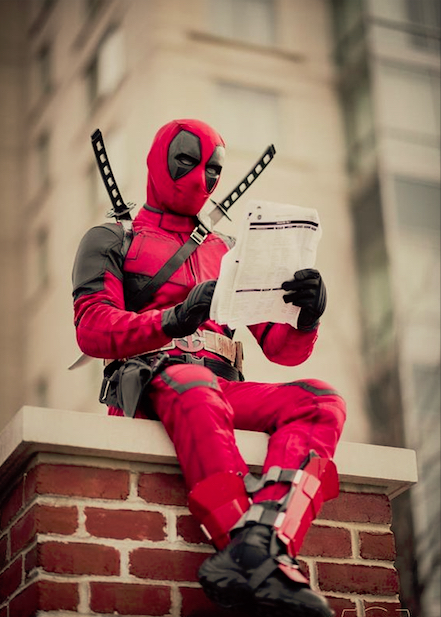 You won’t be strange to this scene if you ever saw the movie Deadpool in 2016: Deadpool sit on some building super high with his feet swaying in the air, and in his hand, there is a newspaper for him to read. What exactly is he reading? I bet it must be a list of the bad guy to kill. After all, he is still a hero, although he denied it all the time.

3.Deadpool Cosplay with another girl? 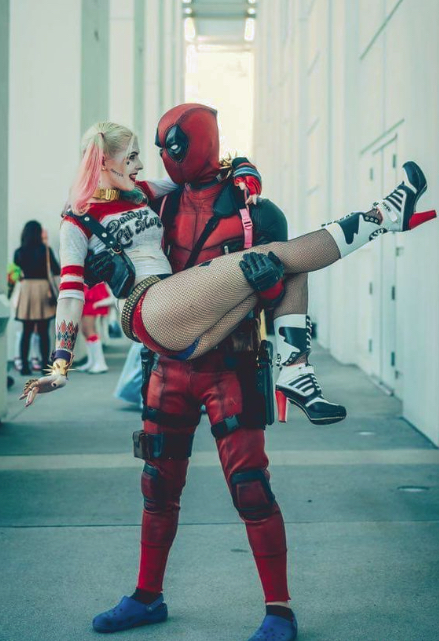 Wow wow wow, what’s that Deadpool doing right now? Carrying a pretty girl in his arm? That’s not what we thought he would do. We all know that Deadpool is a one-woman man in the movie and he just loves his wife Vanessa so much. So why the scene? Yeah, maybe that’s the Deadpool from the original comic book who is s a total playboy, then it makes sense. I have to say in this picture, Deadpool cosplayers and the girl Harley Quinn look great together, maybe that’s another romantic story.

4. Deadpool Cosplay being so trendy 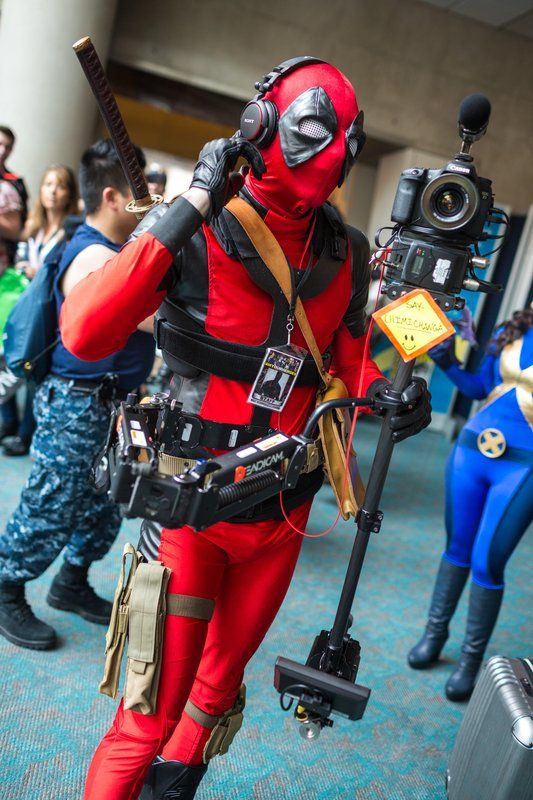 With the earphones and all the professional photography equipment, this Deadpool seems like an electronic fan. We don’t know Deadpool would have an interest in this stuff cause everybody thought all he can do is fighting after all. Next Halloween, you can try on the Deadpool Cosplay Costume and bring all your expensive high-tech equipment and you would be outstanding from all other normal Deadpool Cosplayers with no doubt! 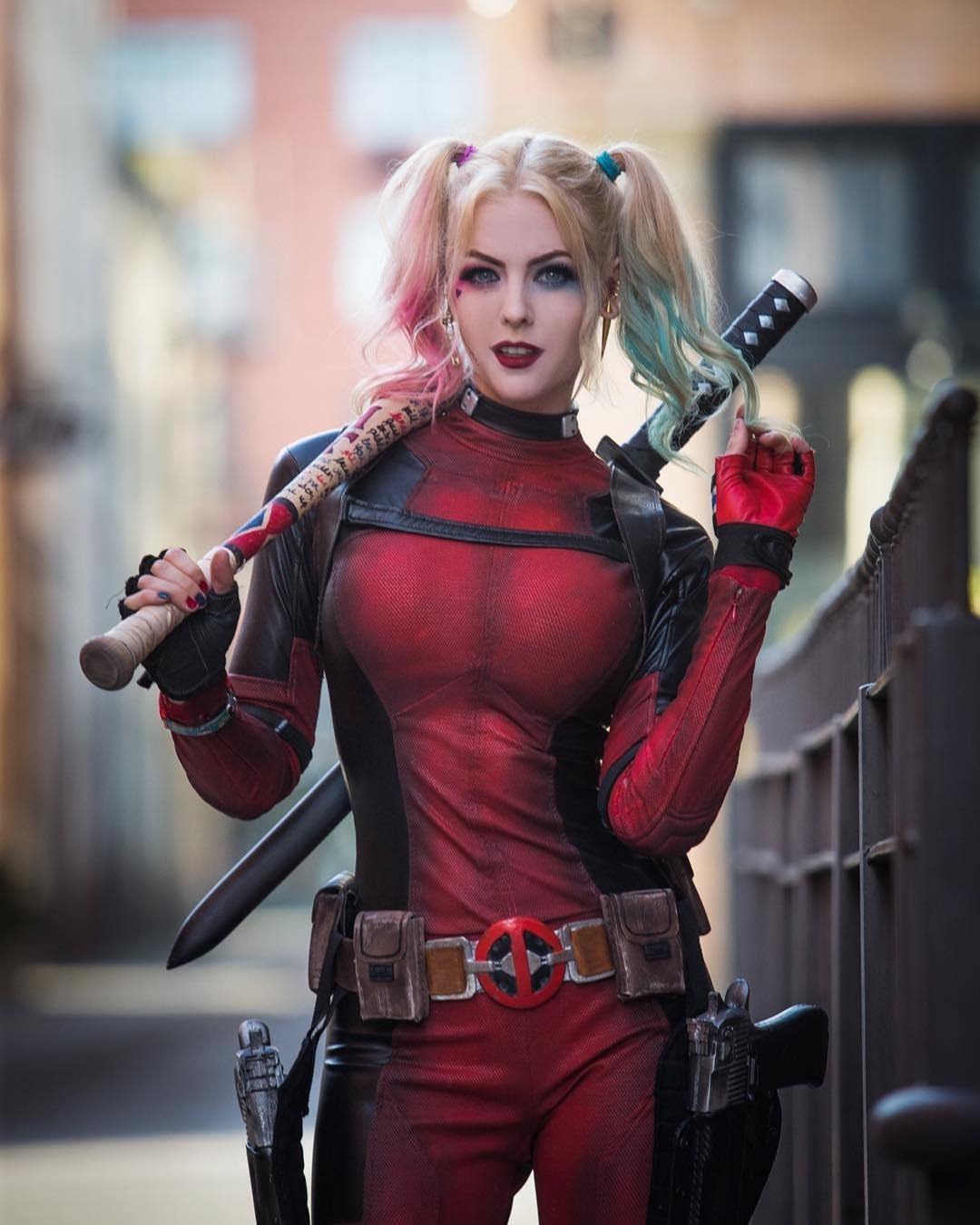 What’s she exactly, Deadpool or Harley Quinn? It’s just hard to tell. The girl is just so creative cause she combines Harley Quinn’s haircut and make-up with Deadpool’s costume, which makes her pretty and tough. With a hot body wrapped in that red suit, who wouldn’t like to contest with this ‘Deadpool’ for even just one time.

6.Deadpool Cosplay with a suit outside 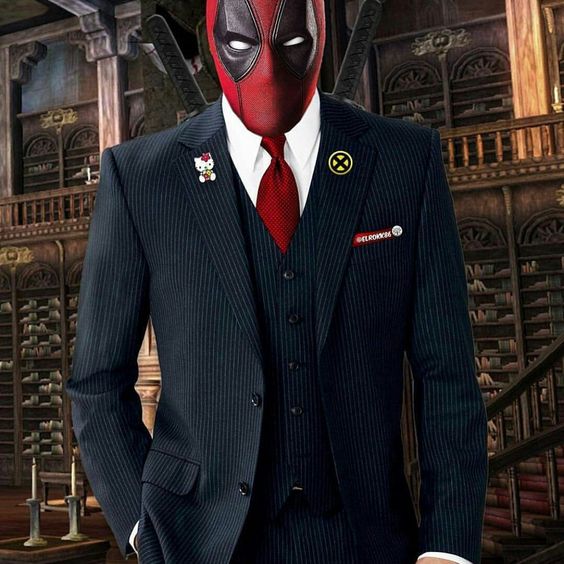 Emm, this client chooses to add a formal suit to his red Deadpool costume, it’s an original idea. Being funny all the time, it feels different for us to see him dress formally. Wait! What’s that on his fancy suit? A HelloKitty? OK, I got it, he is still that funny guy being childish inside all the time. 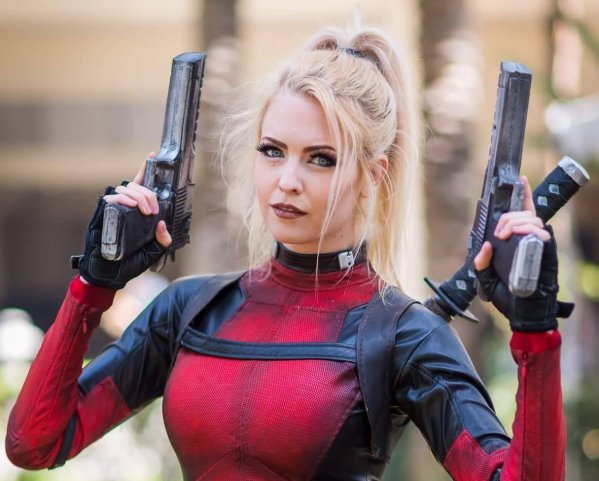 Another hot girl in Deadpool costume is here. Other than her hot look, the guns in her hands attract my attention. The guns are really important weapons for Deadpool, so having them just makes the cosplay more real and complete. Don’t know where to get the original version of Deadpool’s guns? Just contact us here: [email protected] we can help.

8.Deadpool and his own comic book 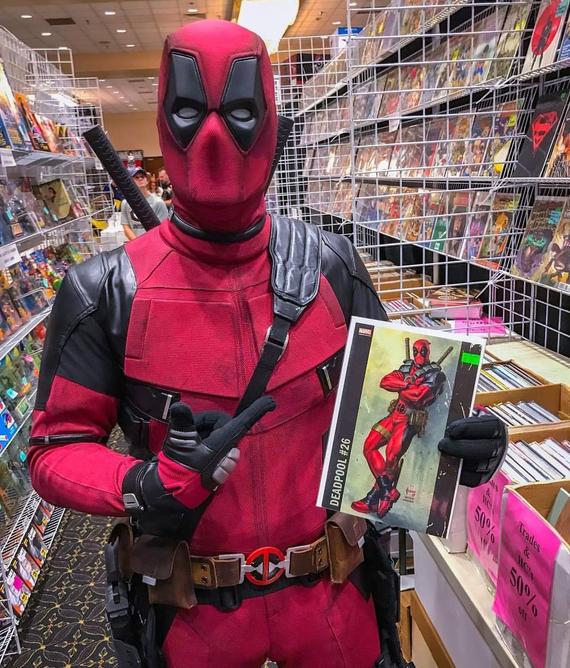 See, the Deadpool is in a comic book store right now, and of course, the first thing he would do is to find his very own comic storybook. As the only character who knows himself as a virtual character in Marvel, Deadpool takes the photo with the comic books telling his story proudly. 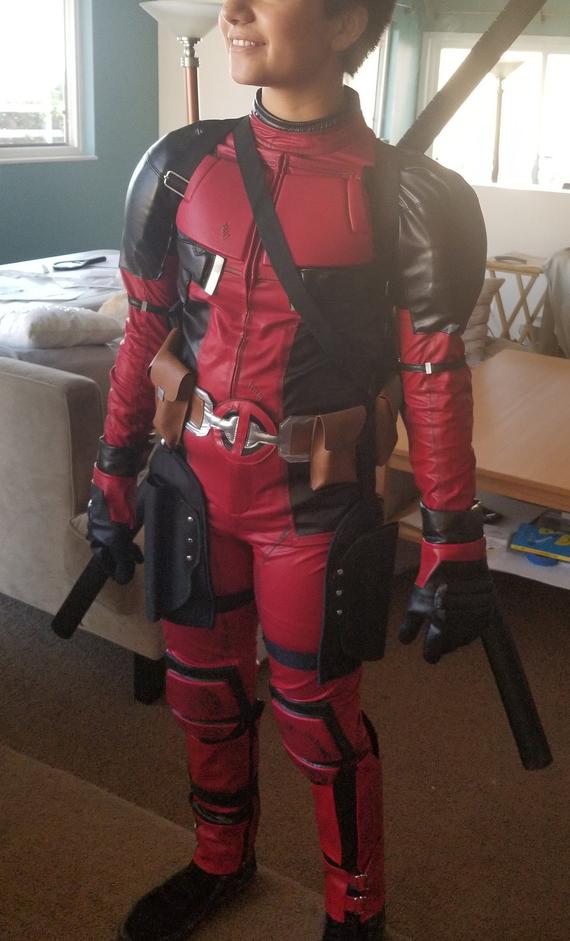 Here comes the youngest client who send the photos of him wearing our Deadpool Cosplay Costume. Though not showing his complete cute face on the photo, you can see him smiling happily with the costume put on. 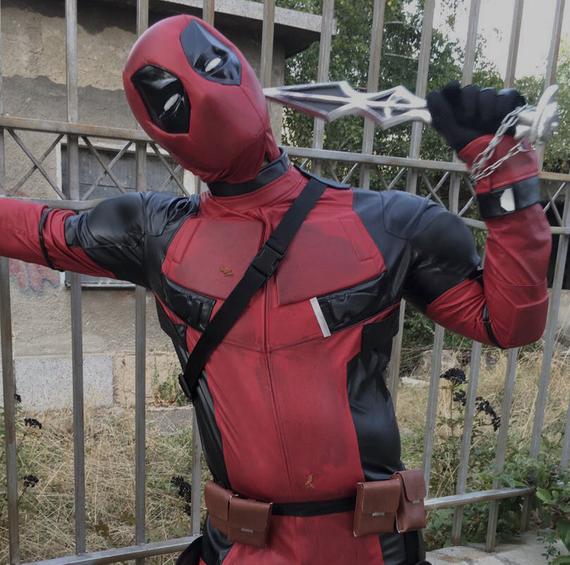 The funny photo portrays the scene where Deadpool tried to hurt or even kill himself. He must be one special existence in superheroes cause he always thinks about how to make a suicide. He is a suicide king who always dreams of dying and getting together with who he loves on heaven all over again. But in the end, he always has to stay alive and save more lives.

So here is the list of our 10 best Deadpool cosplay, which do you prefer? please write down your brilliant idea below in comment area.

If you are interested in getting an exquisite Deadpool cosplay costume for yourself, then you should never let go of these Deadpool costumes we prepare for you. We spent a long time on designing this Deadpool 2 Wade Wilson Cosplay Costume to make it perfect. This Deadpool Wade costume is screen-accurate to what Ryan Reynolds wore in the movie. It is made from PU leather of highest quality. After all, our customers deserve the best! 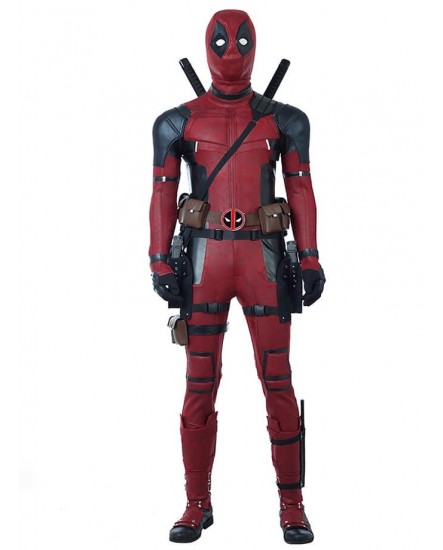 This costume is perfect for cosplaying! Our Deadpool 2 Wade Wilson Cosplay Costume comes with a detailed jumpsuit with matching boot covers, and you can click to buy the boots on the page of costume. Also included are a red Deadpool mask and a detailed red belt with bags! Gloves, strap, leg bands with holsters are included too! 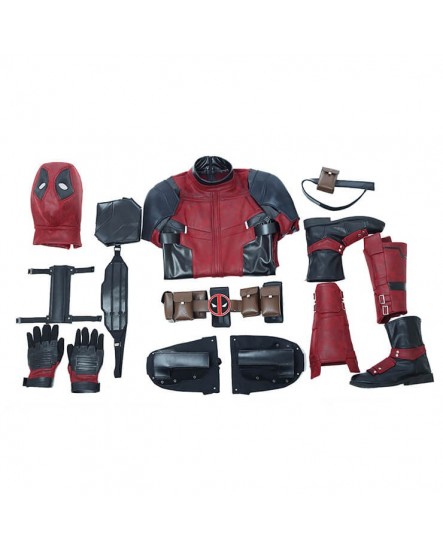 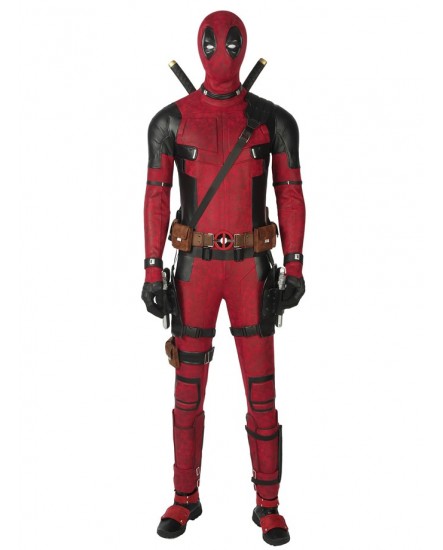 The Deadpool costume is Black and Red, but mostly Red since we don’t want the bad guys to see you bleed! Use your superhuman strength, resilience, speed, mobility, and regeneration to win your girl back. Pick up our Deadpool 2 Wade Wilson Cosplay Costume today. Available at xcoos.com!!!