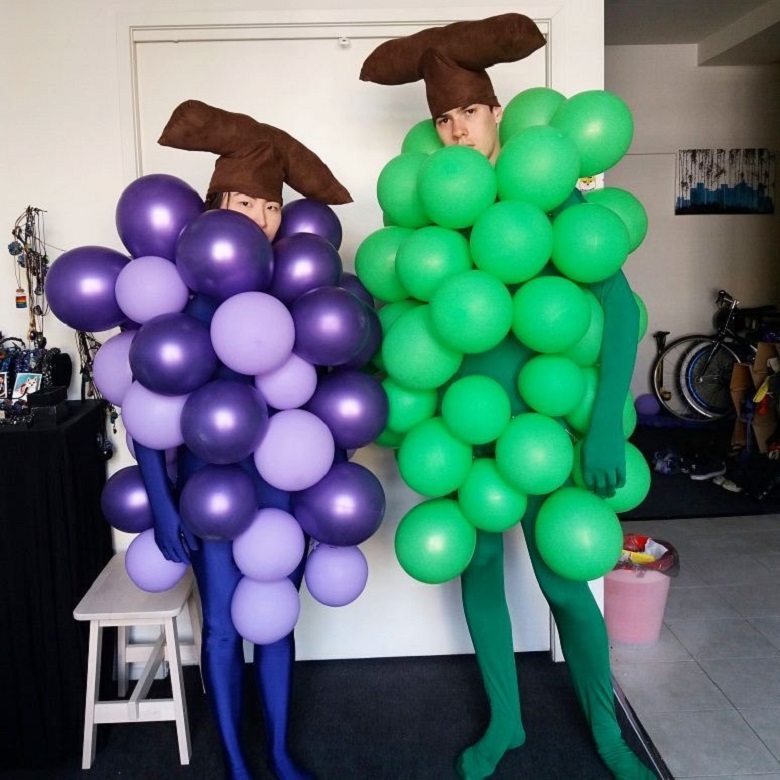 We can tell from the picture that one of them is cosplaying purple grape, the another is cosplaying green grape, apparently they choose the fruit as their halloween costume theme, and frankly speaking, it actually works very well, at the first sight of them, it does make me laugh. Two of them manage to turn themselves into a bunch of grapes. Well, all i want to say to the both of them is, “You guys are doing a grape job”. 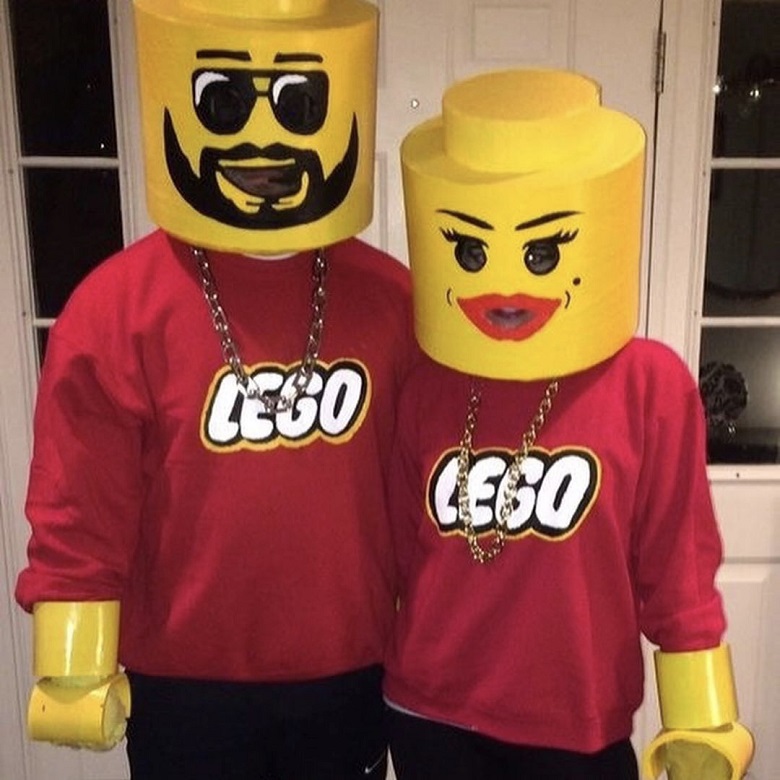 For those who are not familiar with lego culture, is a line of plastic construction toys that are manufactured by The Lego Group, a privately held company based in Billund, Denmark. The company’s flagship product, Lego, consists of colourful interlocking plastic bricks accompanying an array of gears, figurines called minifigures, and various other parts. Lego pieces can be assembled and connected in many ways to construct objects, including vehicles, buildings, and working robots. Anything constructed can be taken apart again, and the pieces reused to make new things. In the picture, the lego element is over their body, such as lego headpiece, lego sweatshirt, lego gauntlet. I must admit that the expression on the headpiece makes me cannot help laughing. 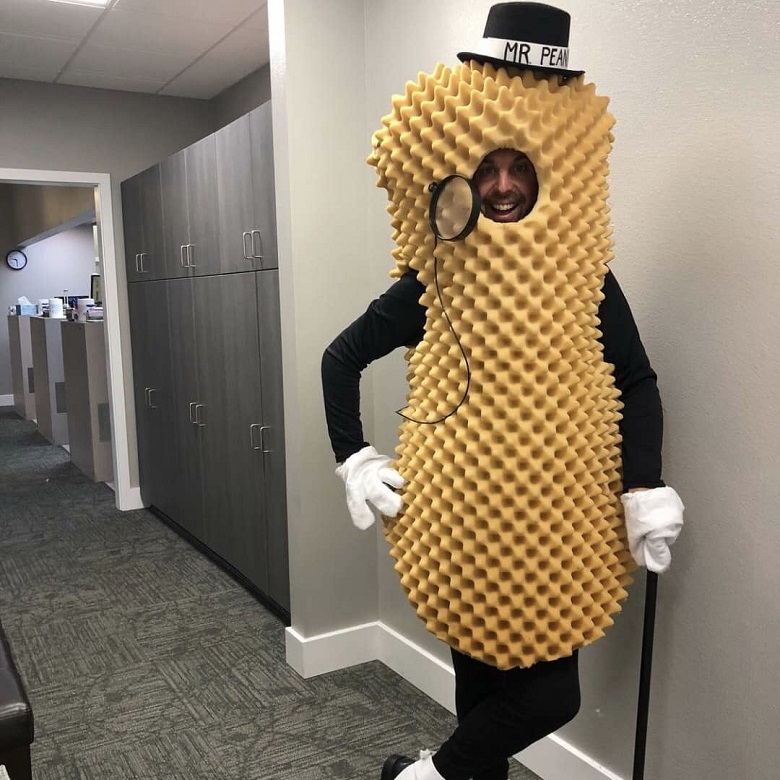 Mr. Peanut is the advertising logo and mascot of Planters, an American snack-food company and division of Kraft Foods. He is depicted as an anthropomorphic peanut in its shell dressed in the formal clothing of an old-fashioned gentleman: with a top hat, monocle, white gloves, spats, and a cane. Mr Peanut is also said to be a magician with a rabbit in his top hat. He is reportedly of British heritage and has the proper name of Bartholomew Richard Fitzgerald-Smythe. In this picture, the reduction of black hat, magnifying glass, and the walking stick, not only make the whole costume become more vivid and stereoscopic, but also adds a sense of humor. 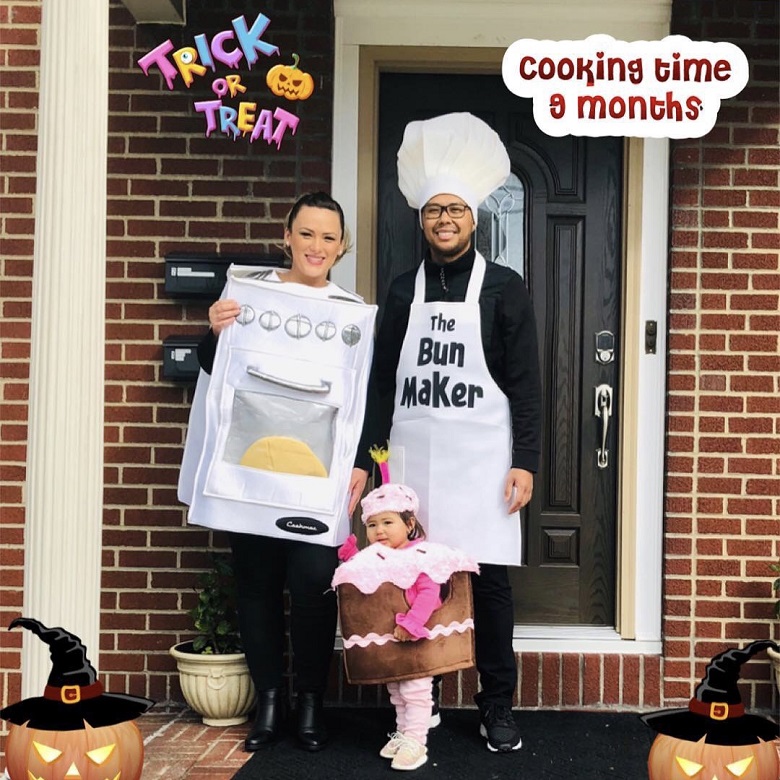 Mom is wearing oven costume, Dad is acting as the bun Maker, and daughter becomes the bread, what a lovely and funny scene! If you and your family want to prepare the family halloween costume, why not try this style of costume, you don’t have wear the same costume in the picture, just find something normal, and connected between each other in our life, the you will realize that you can also have your own funny halloween costume. So what are you waiting for? Let’s get it. 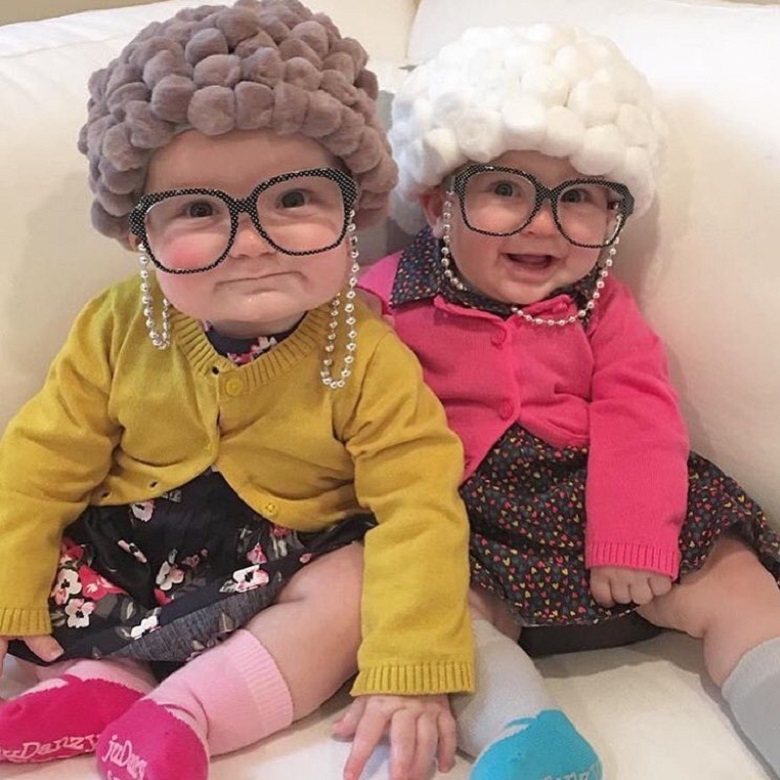 It’s really funny for me to see these cuties wear their awesomely simple old lady babies costume. No kidding, the longer i see this picture, the stronger the feeling of anachrony is. In a word, these babies really amaze me! 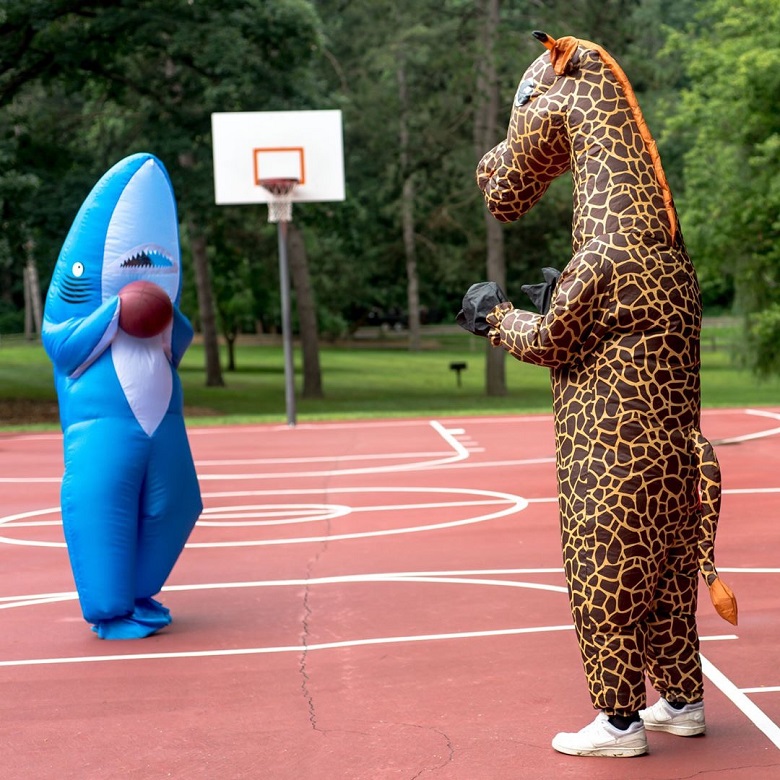 It looks like the Shark and Giraffe are ready to fight, and they take the duel very seriously, however, with this funny costume, i cannot help laughing. So i have a question for all of you, “Who will win the fight?” 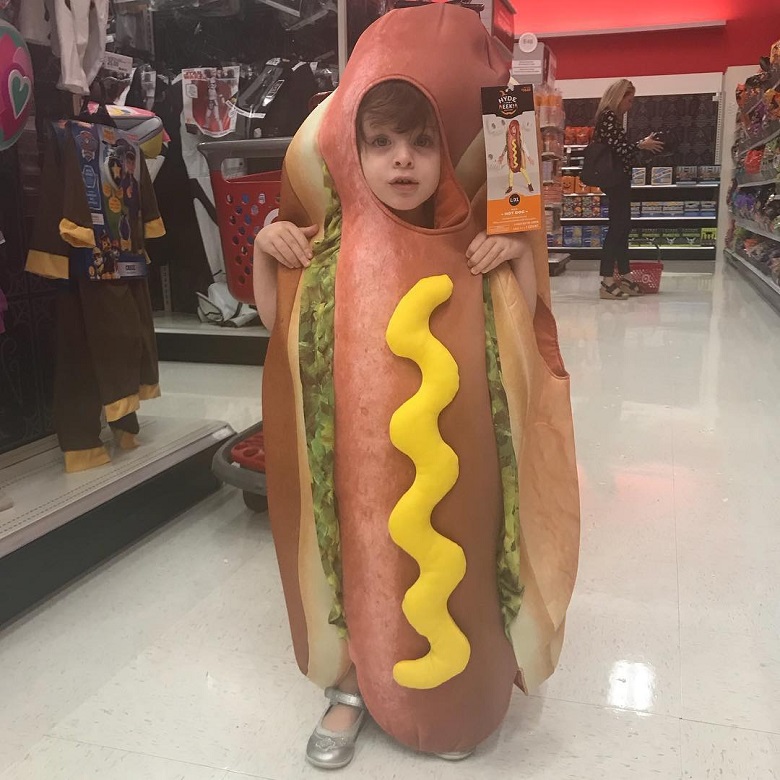 I can’t wait to eat this lovely “hot dog”, if you want some costume cute and funny, this hot dog theme can be a good choice. 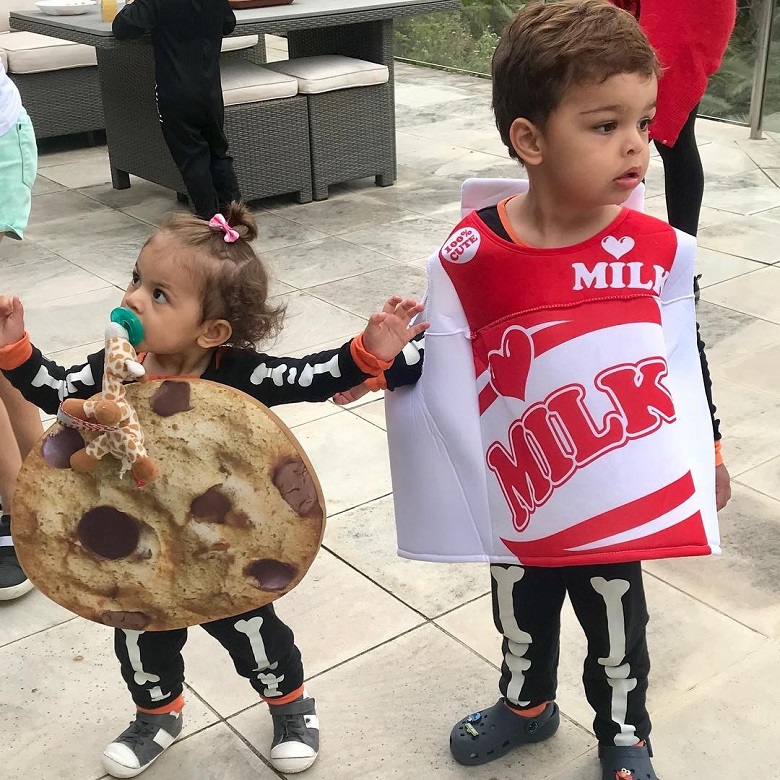 Cookie plus milk, what a perfect match! It’s always a pleasure to see the cute kid in this funny costume. 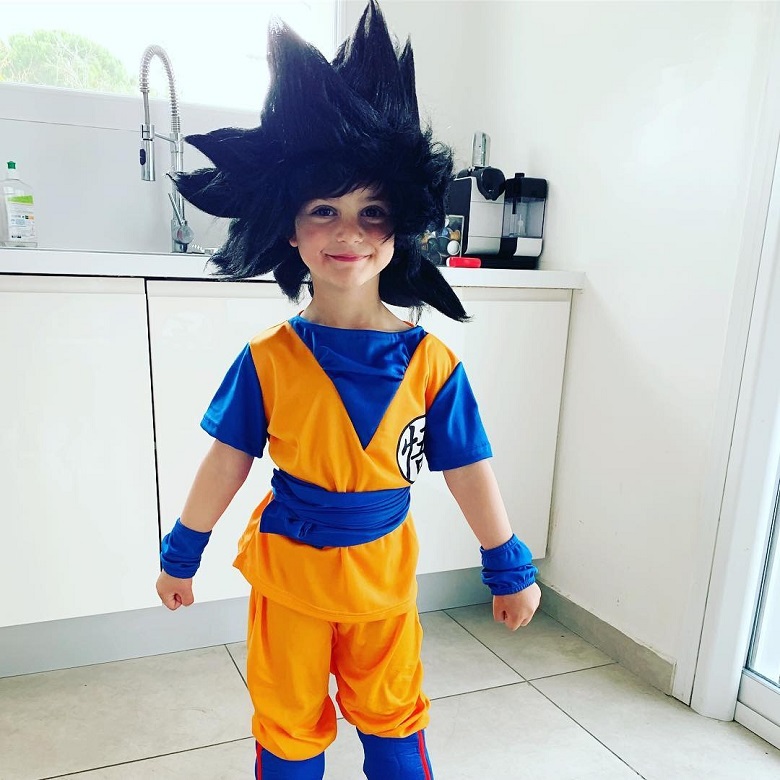 The character the kid cosplay is called Son Goku from “Dragon”, which is an animation created by Akira Toriyama in 1984, actually I don’t need tell you how hot this anime is, because anyone who is interested in animation knows it more or less. Now take a look at this kid, i have to praise him for doing a really good job on the wig, I’m completely impressed by it at least. 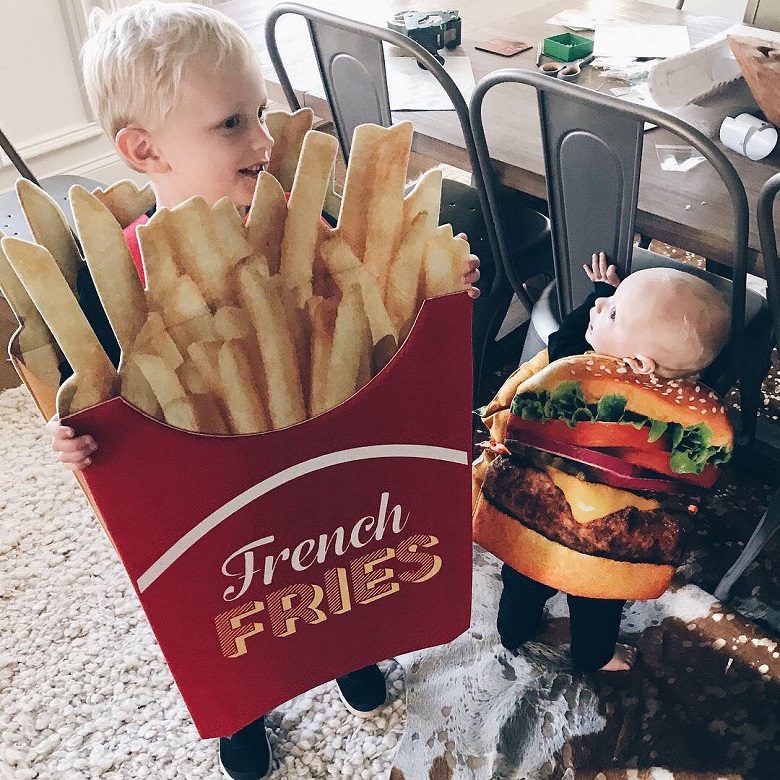 Elder french fries brother and younger hamburger brotherm, all i can say is what a loving combination, even though i’m a little unhappy right now, I still burst into laughter at the first sight this two cute costume. 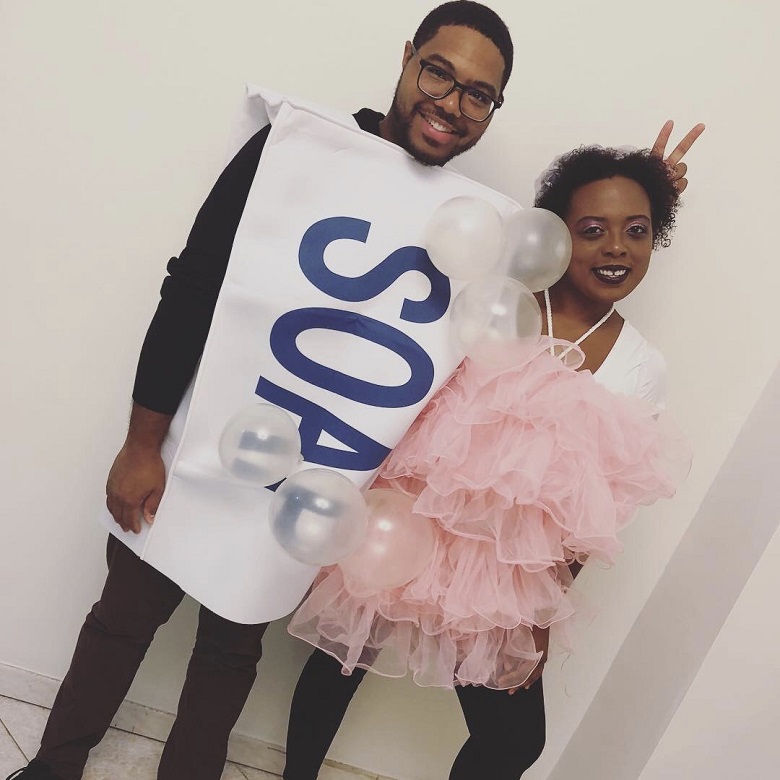 Soap and loofah also can be a good funny halloween costume idea, in the picture, we can see that it’s no hard to prepare this two costume, and it also tells that altough this two things is quite norma in our life, but i guess the message it tries to convey is that the relationship between this couple is as good and intimate as soap and looafh. But truth be told, although the theme of costume is very nice, the impression of first look on this two costumes was a littl funny, so if you want to try different styles of costume, don’t miss it. 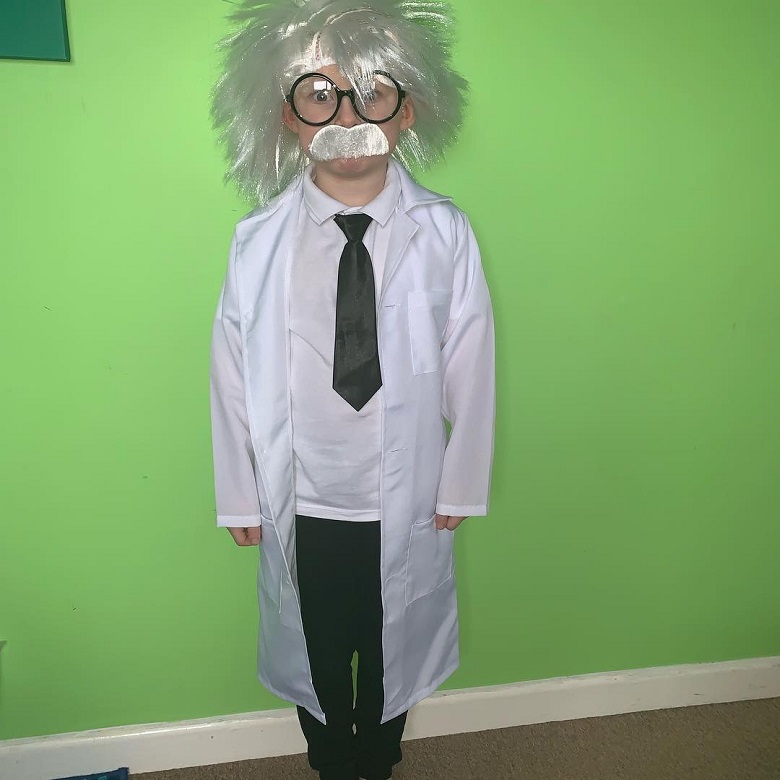 Basically, the kid has already got the hang of showing the funny side of Albert Einstein, I have to say that, I can hardly take my eyes off the wig and humoristic beard.

I wish that you can get inspired from any one of these funny costume, but if you need more practical advices about the funny halloween costume, you can have a try on our website:xcoos, a lot of funny costumes is being on sale, i bet that you are sure to find the one you like.