When and where is MCM Comic Con London 2018?
MCM London Comic Con began on Friday, May 25 and ended on Sunday, May 27 at London’s ExCeL Centre. Thousands of comic fans and cosplay fans were heading to London this weekend for the three-day MCM Comic Conference. It’s a time of year when heroes from the comic book world descend on London. If you were here, you will be amazed at this spectacular scene. It is definitely a visual feast. Some movie buffs dressed as their favorite superheroes, such as characters in Deadpool, Superman, Stars Wars and Power Rangers. Some people reach here just want to see the special guests from the world of TV and film, voice actors, artists, and writers, including Rosario Dawson, who plays Claire Temple in Netflix’s Deadpool 2, James Purefoy from Altered Carbon and Black Panther star Letitia Wright. And there are also comic fans there with their team to show their fondness and crazy of the anime. Of course, if you are a computer game fans, you should not miss this conference either since this conference was also boasting a meeting of voice actors from computer games, including the actors who provide the voices for characters in Overwatch, Grand Theft Auto, and Metal Gear Solid.

Conventions are a chance for pop culture enthusiasts to really let out their inner geek and passion for the shows, books, comics, manga, anime, and films that they love. And so with MCM Comic Con London beginning at the Excel Centre in London, and bringing out all the weird and wonderful costumes that we have come to expect and love, it’s your chance to get in on the fun.

Some of Best cosplay from MCM Comic Con London

1.A family of superheroes! 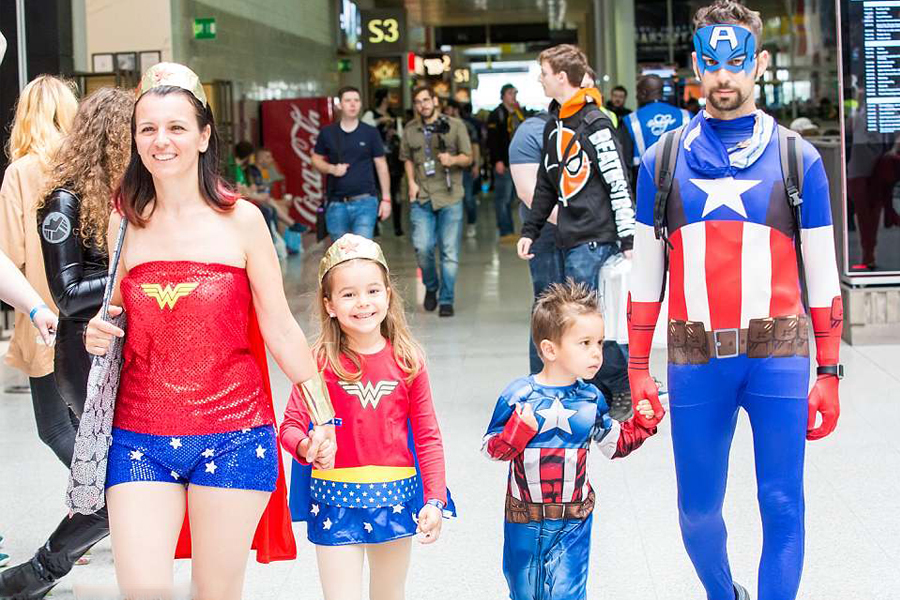 A family-of-four is pictured dressed as various superheroes at the Comic-Con event in London, it is a really very attractive and warm screen！The mother and her daughter dress as wonder women smiling happily while the father and his boy suit as supermen look very serious. If you have such family member, why not try this creative idea? 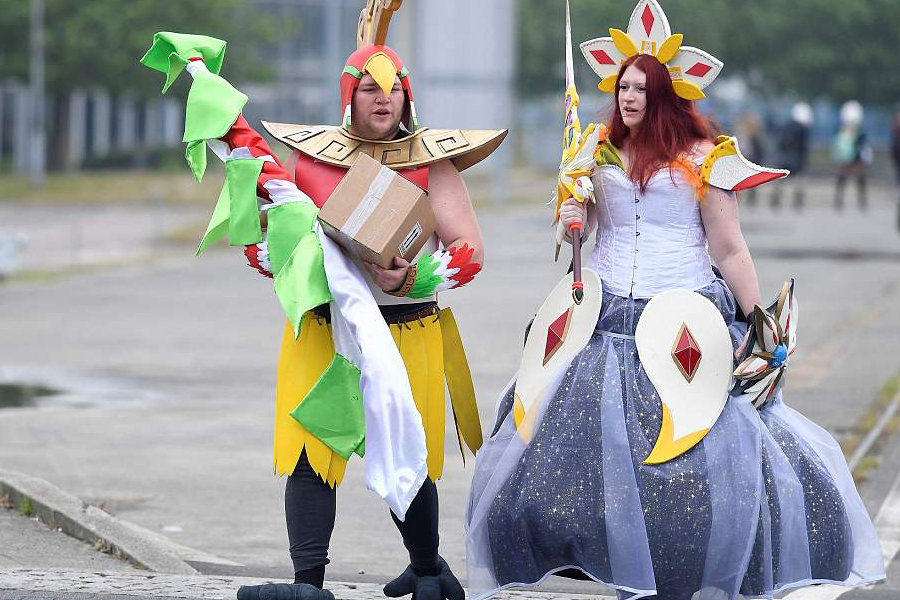 Looked at this lovely couple, they dressed as their favorite computer game characters and made their way towards the convention center, I guess there are many people turn back to see their costumes. Don’t you like them?

3.Chewbacca at the Star Wars 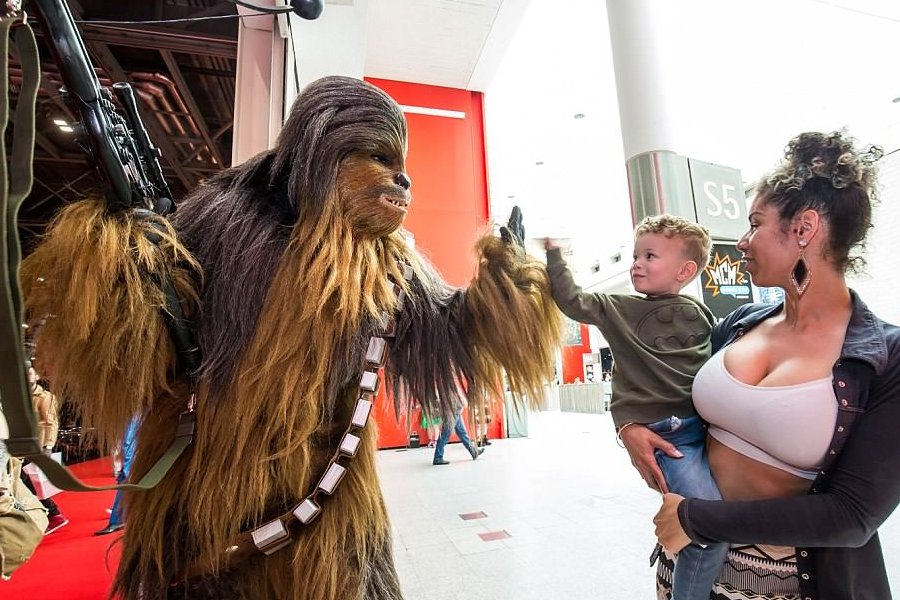 A young lady brings with his little son to join in the fun at the Excel convention hall this afternoon, he was attracted by this big hairy guy in front of him, he was so excited and can not wait to touch hands with him. Love me? Give me five! 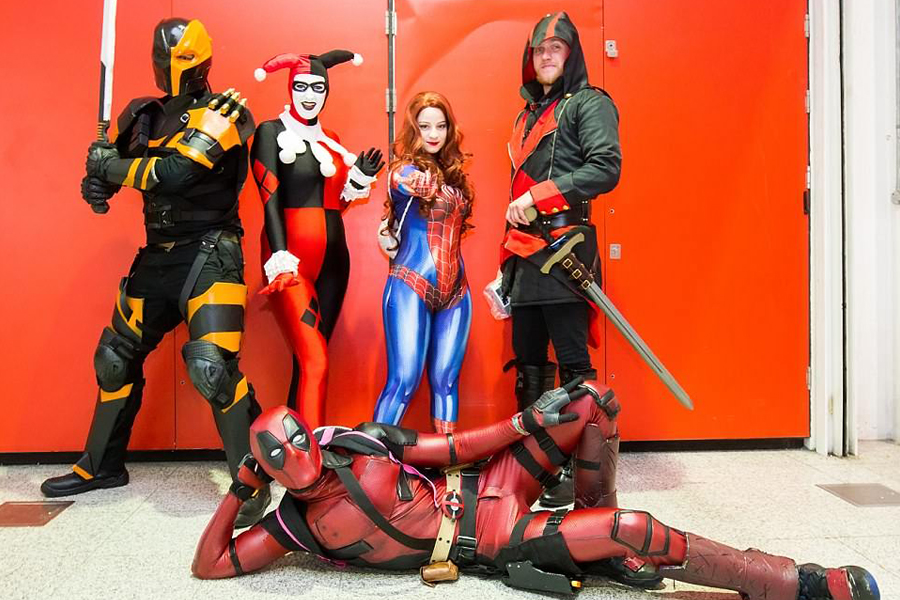 They come from different places but they were here for the same purpose. They dressed as their favorite superheroes are descending on London’s Excel center this week for the annual Comic-Con. Press the shutter, time is fixed at this moment! 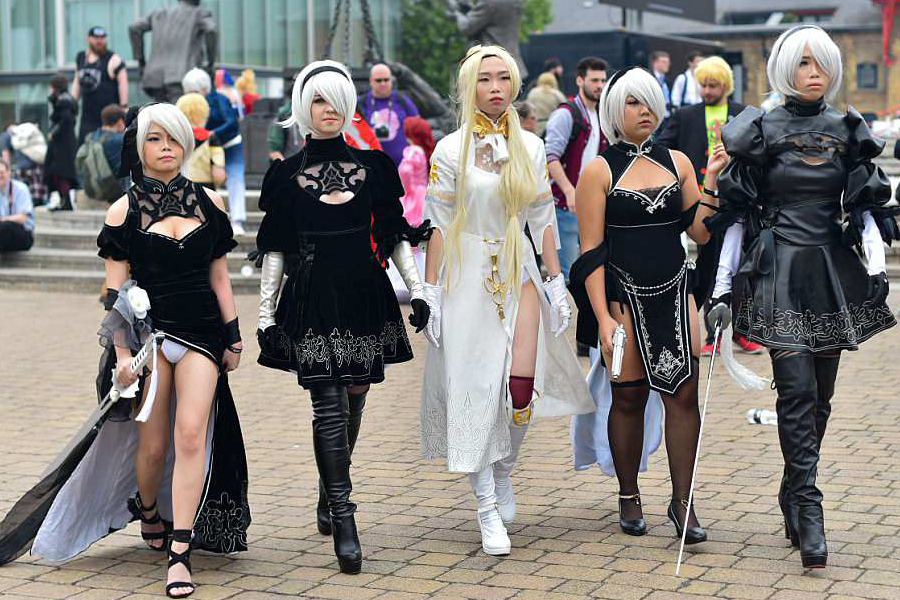 Visitors have come from all around the world for the three-day event in east London celebrating comic books, films, and games. It is really an important moment for them, prepare for it, wait for it, and now they’ve got the chance to joint it and enjoy it! 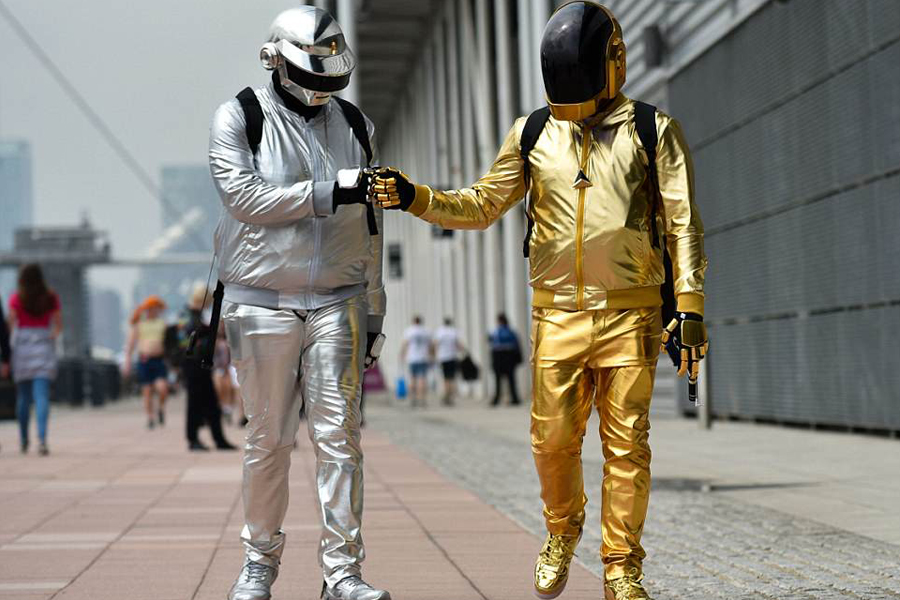 Two men dressed as Daft Punk give each other a fist pump as they head into the convention center. It is so lucky to see another men wear the same type suit as yours in this Comic Con. Both of them were excited to see each other. 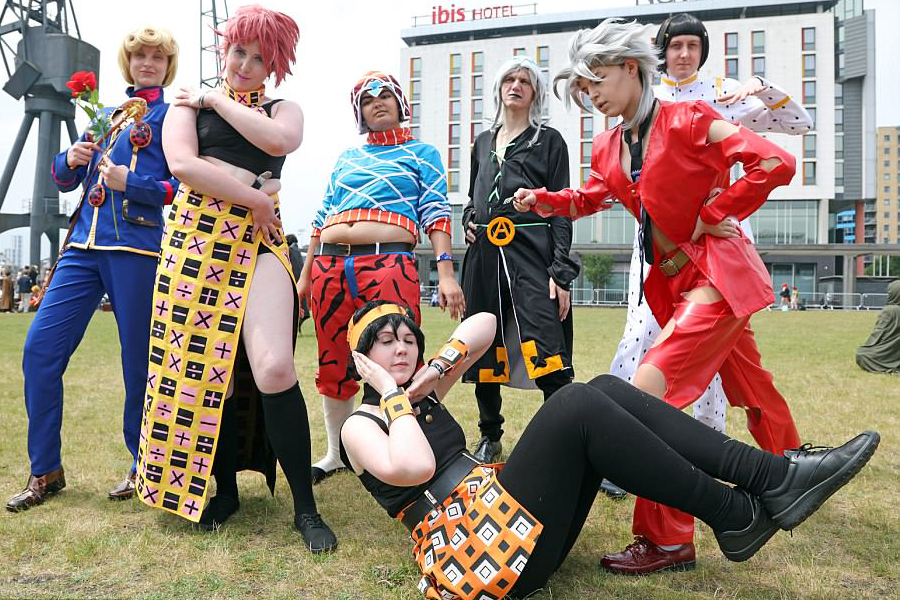 They are playing on the grass outside the exhibition center, each of them has a unique facial expression, but all of them are enjoyed themselves. If you are a passenger, you can not help taking a photo of them without disturb. Maybe this is an amazing dream for them, they are addicted to showing themselves. 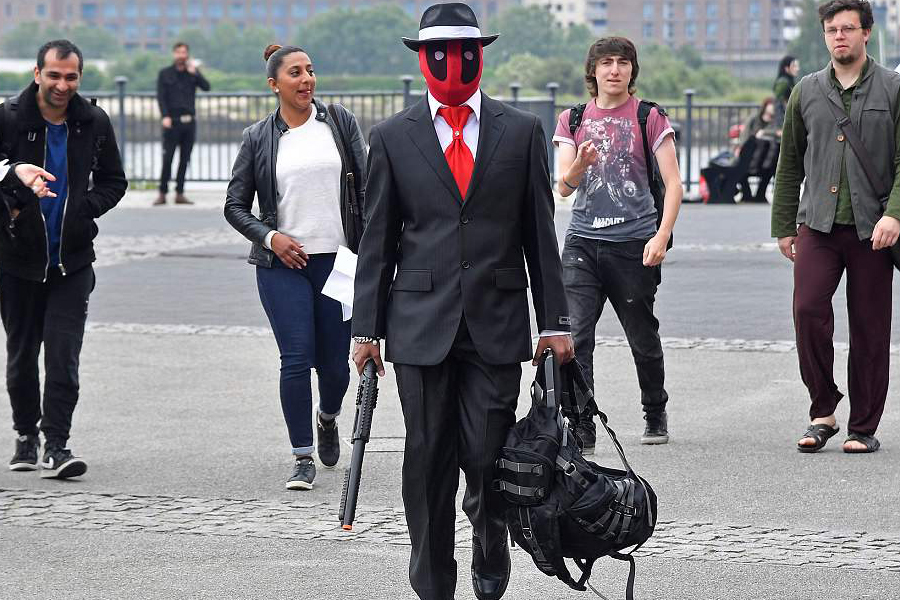 We are not sure which character this man cosplay, but absolutely he is very cool and unique. As you can see, people around him can not move their eyes from him. It was so lucky that this sinister-looking men not to have been stopped by police on their way there. 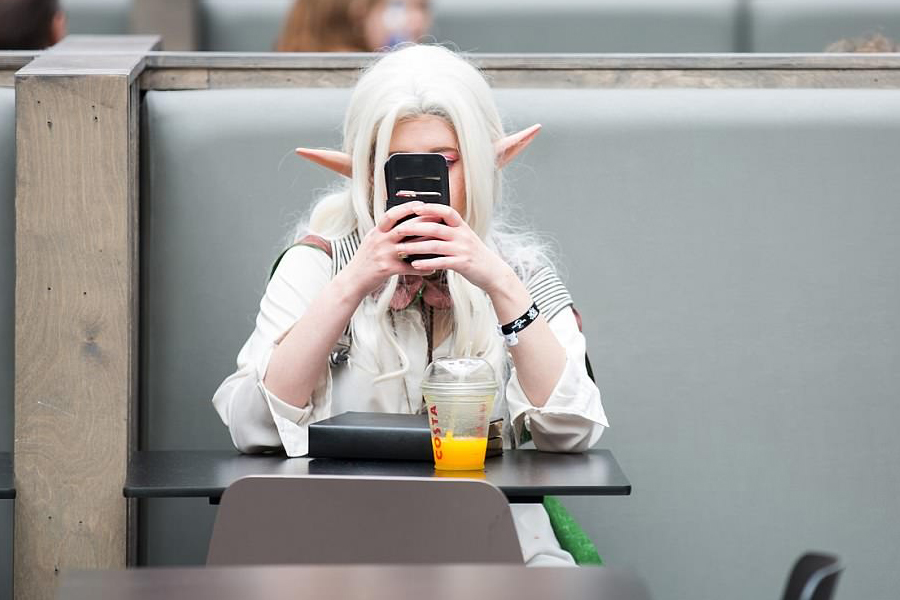 This curious-looking girl with long ears sit there quietly, she takes time out from the convention to selfie by her phone and enjoys a juice. 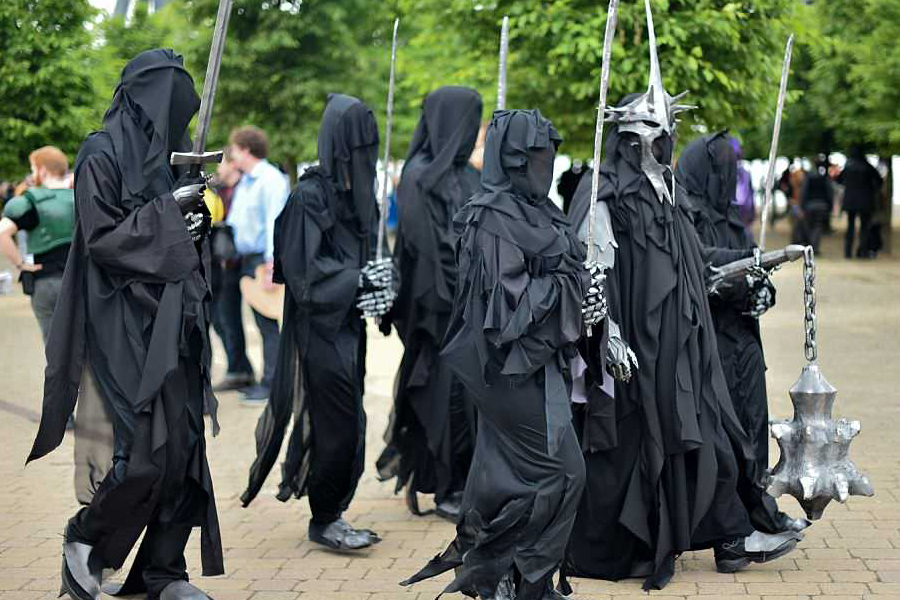 A group of fans who wear black costumes covers from their head to their foot, march towards the center with their swords held high this afternoon. If we saw this scene on the street usually, we will be scared and hide away from them.hahaha…they look really like some terrorist organization. 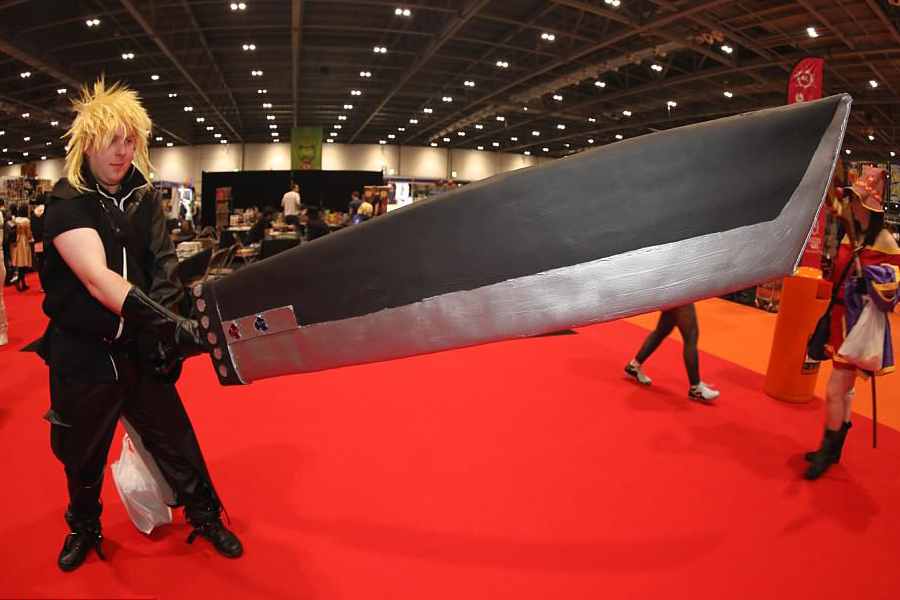 Inside the hall,fans is going to play out the lives of their favourite fantasy film, superhero comic and action game characters. A man holding a bigger chopper is really eye-cached! I just wondering how he brought this big chopper here. 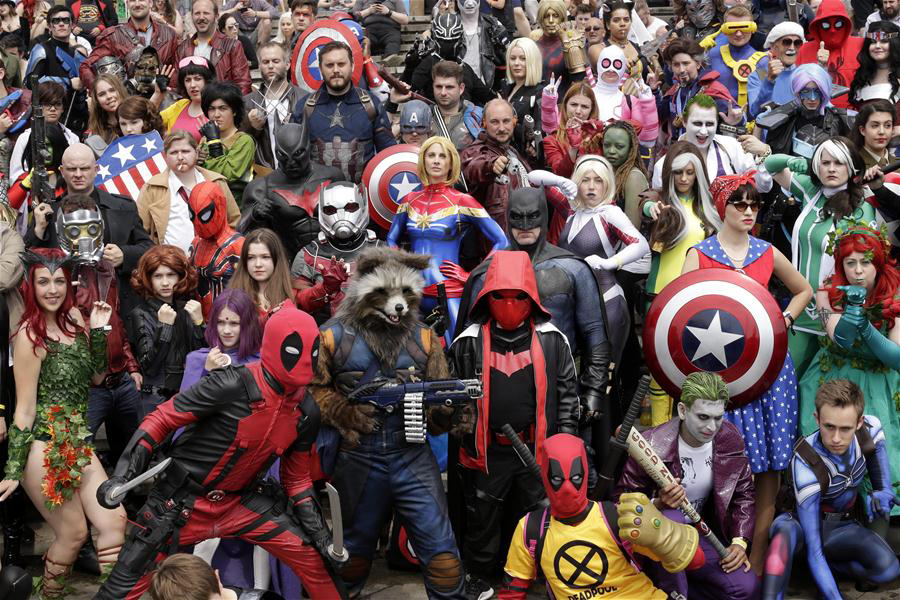 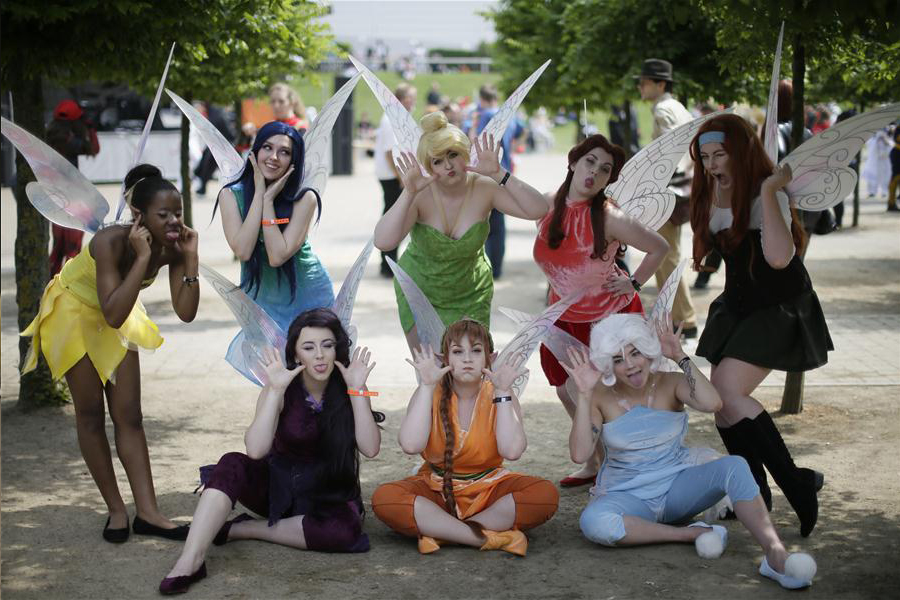 14. Enjoying the convention in the crowd. 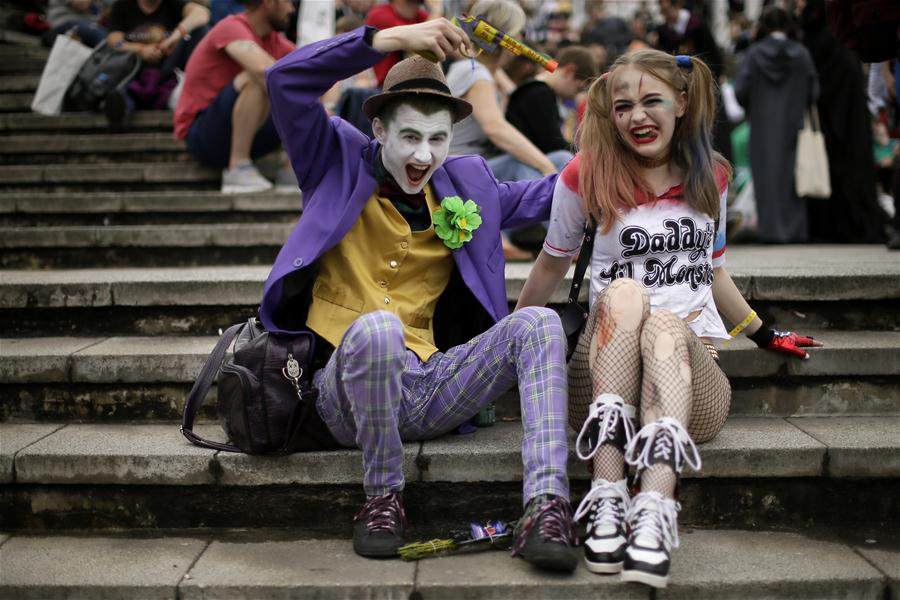 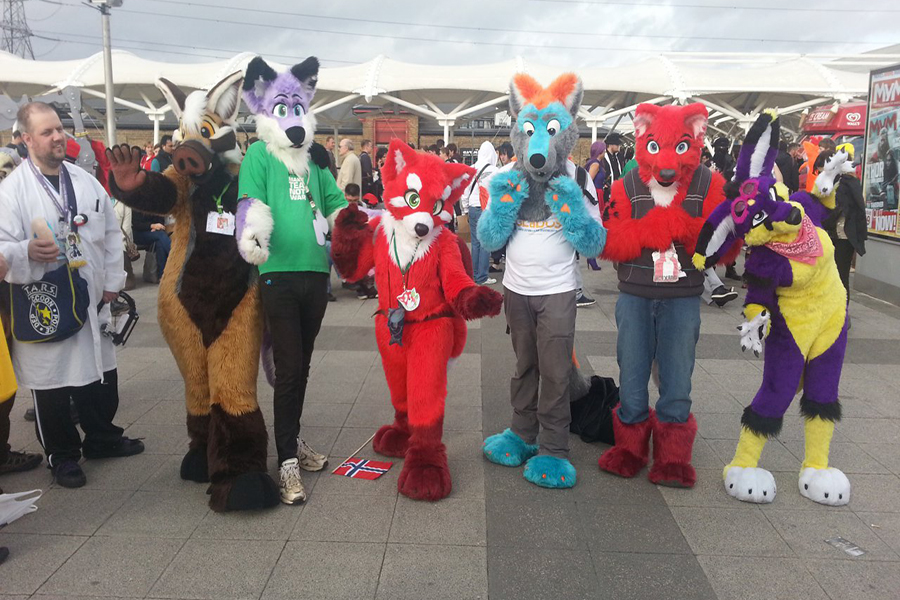 There are too many interesting and funny cos-players to list in this MCM Comic Con London . If you are an anime fan or cosplay fans,you definitely should not miss every big Comic Con. Only when you come there, can you feel cosplay is real. After you see so many vivid cosplay show, do you want to have a try? If you are plan to buy cosplay costumes,our store is your best choice.Xcoos have professional designers, perfect toilers, all the costumes can be custom-made with the high-quality material to make it fit well just for you.