The Essential Wigs For Frozen2 Cosplay Everytime when we talk about the topic of cosplay, the fisrt thing that occurs to our mind must be those beautiful costumes, but somehow we are always accustomed to ignore those “unremarkable” cosplat wigs, which plays an important role in the cosplay culture. So today let’s have our eyes on the recent hot anime movie “Frozen 2”, and take a careful look at each Frozen 2 cosplay wig of these characters. 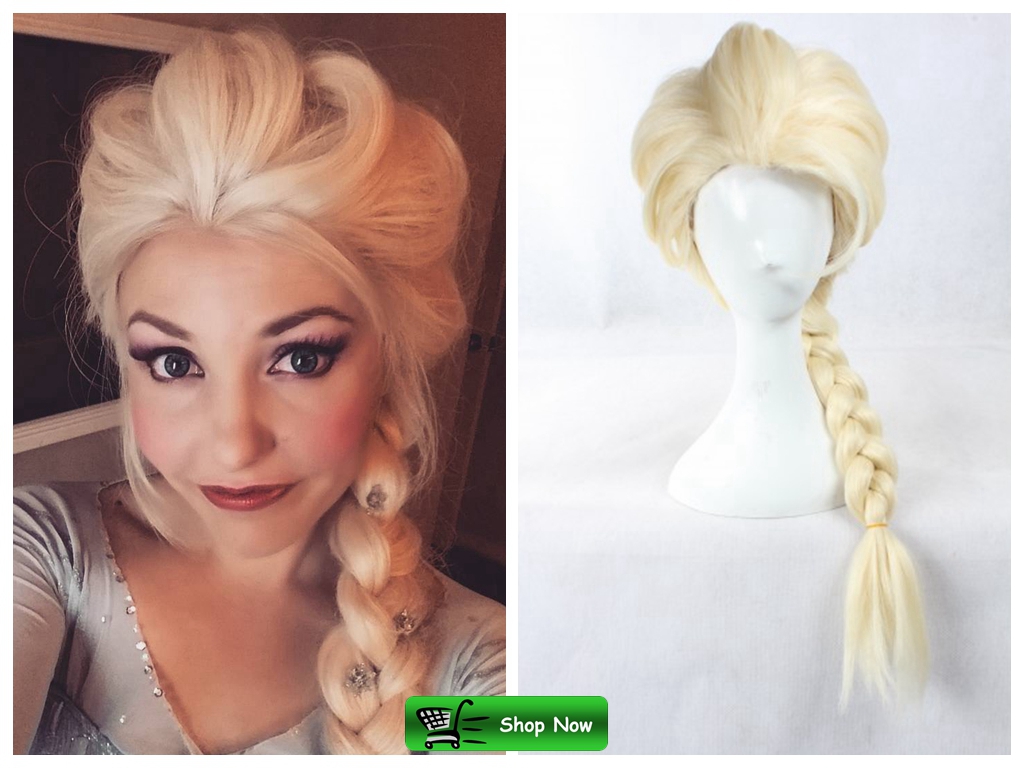 From the outside, Elsa looks poised, regal, and reserved, but in reality, she lives in fear as she wrestles with a mighty secret – she was born with the power to create ice and snow. It’s a beautiful ability, but also extremely dangerous. Haunted by the moment her magic nearly killed her younger sister Anna, Elsa has isolated herself, spending every waking minute trying to suppress her growing powers. Her mounting emotions trigger the magic, accidentally setting off an eternal winter that she can’t stop. She fears she’s becoming a monster and that no one, not even her sister, can help her. 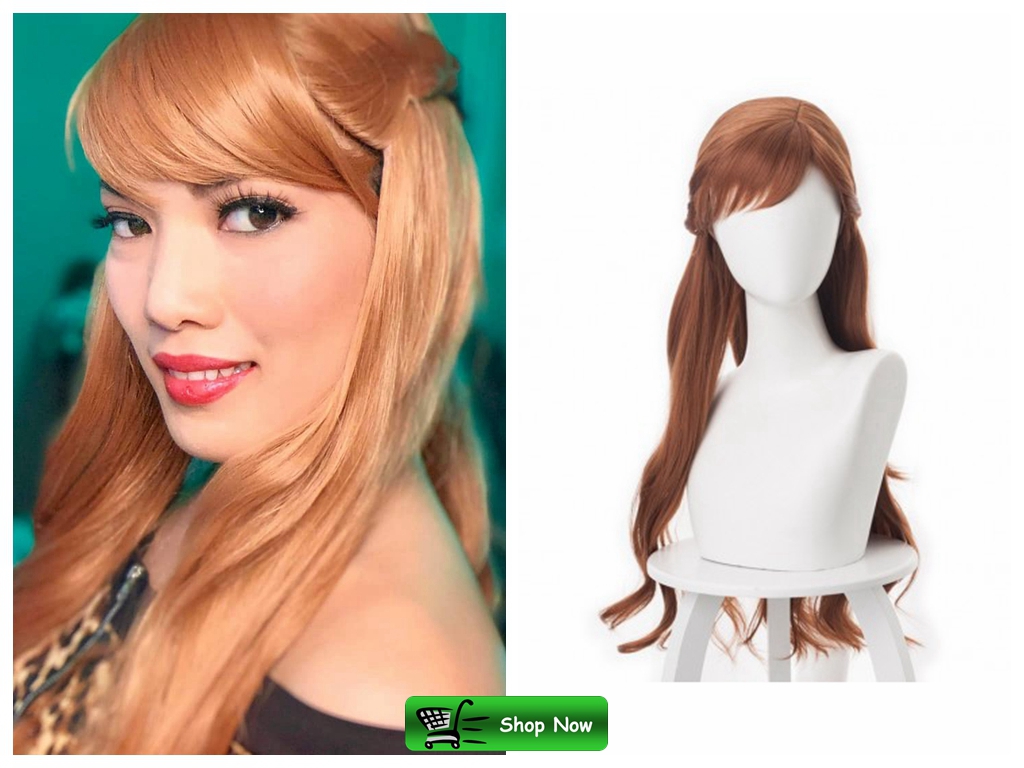 Anna is more daring than graceful and, at times, can act before she thinks. But she’s also the most optimistic and caring person you’ll ever meet. She longs to reconnect with her sister Elsa, as they were close during their childhood. When Elsa accidentally unleashes a magical secret that locks the kingdom of Arendelle in an eternal winter, Anna embarks on a dangerous adventure to make things right. Armed with only her fearlessness, a never-give-up attitude and her faith in others, Anna is determined to save both her kingdom and her family. 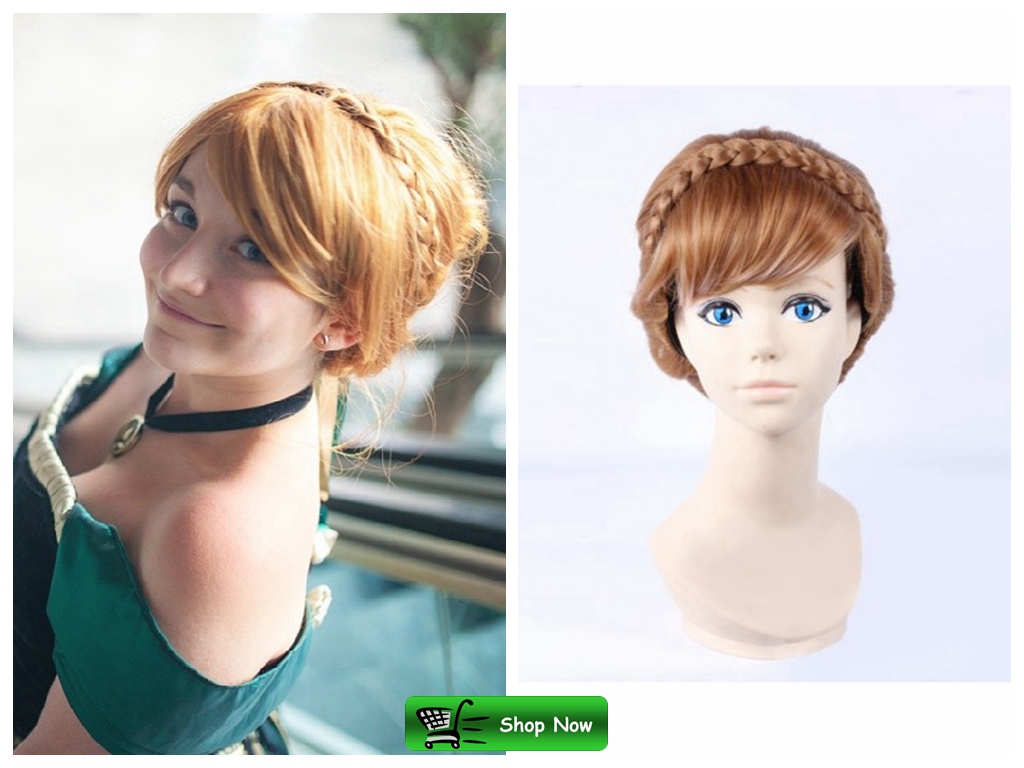 At 18 years of age during the original film and 21 during Frozen II, Anna has a slender build and fair skin. She has turquoise blue eyes, rosy cheeks, thin lips, long strawberry-blonde hair mostly tied into two braided pigtails, bangs down her forehead, and a light dusting of freckles (a trait that she shares with her sister Elsa, although due to being slightly older, Elsa appears to have fewer freckles than Anna); her face is also slightly rounder than Elsa’s. When she wears sleeveless dresses, it is shown that she has some freckles on her shoulders in addition to the ones on her face. She has a platinum blonde streak that matches Elsa’s hair color on the right side of her hair due to an accident in which she was struck by Elsa’s magic during childhood. The blonde streak remained for years until the curse on Anna’s frozen heart was broken and the streak was removed along with it. 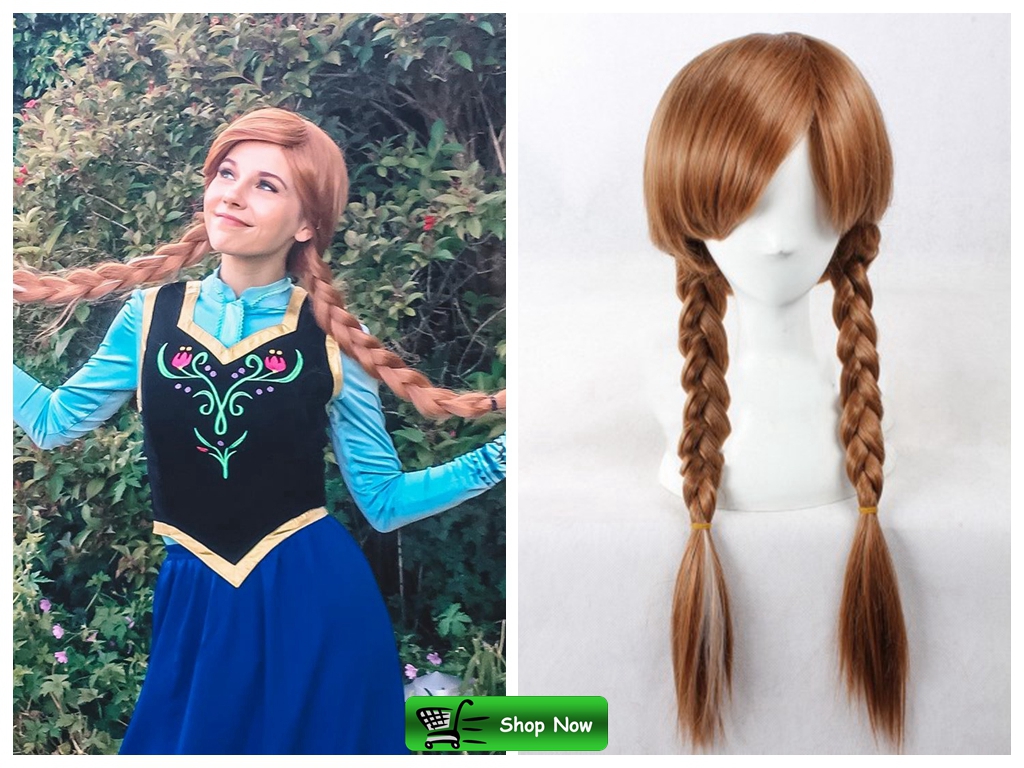 All of her outfits have rosemaling, reflecting the movie’s Norwegian setting. In her coronation dress, Anna wears a black sweetheart bodice with dark green off-the-shoulder straps and rose, teal, blue, and purple prints on it, and has greenish-gold trim, a black satin-laced necklace with a bronze pendant of Arendelle’s symbol, an olive drab pleated skirt with sashes consisting of the following: asparagus centers with pink, crimson, dark olive green, olive drab, and blue prints on it between cream sides and dark green pleats, both cream petticoat and frilly knee-length pantalettes, white stockings, and a pair of black ballet shoes. She wears her hair in a bun, and a part of her hair is braided and used as a headband, a green comb-shaped barrette with a couple satin ribbons green and chartreuse attached to the back of her hair, and dark pink lipstick. She also wears a teal cape with a cyan bow as a clasp for the cape, sapphire oval-cut hem with azure line, blue dots on each cut, and small sapphire dots all around the cape. 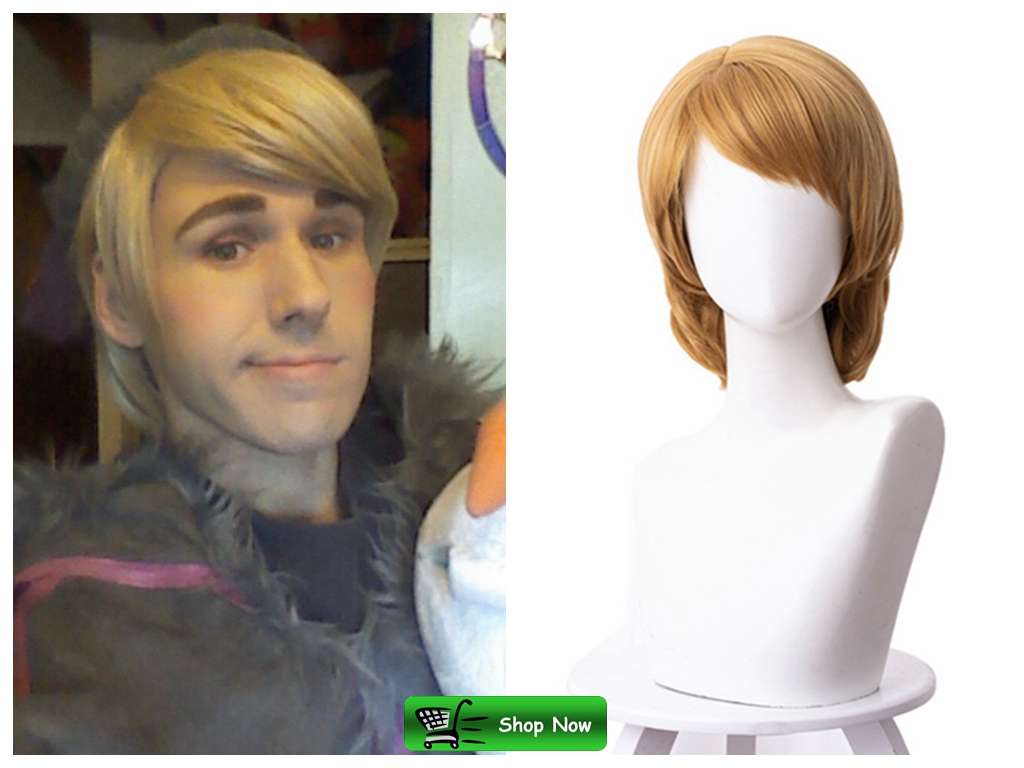 Kristoff is rugged and 21 years old, the same age as Elsa, at the time of the movie. Like the sisters, he has blond hair (more golden than Anna’s strawberry-blonde hair, but not as pale as Elsa’s platinum blonde hair) which is later described as “unmanly” by the trolls (in the song “Fixer Upper”). He has light brown eyes and fair skin with a few freckles across his nose. His nose is quite big and his cheeks tend to redden a lot, because of the cold weather.

In the sequel, he now wears a royal delivery attire in a shades of brown. He later wears this during their travels to the Enchanted Forest. When he stays with Elsa and Anna at the castle, he wears a dark purple long robe along with his sleeping attire.

At the end of the film and Anna is now crowned as the queen of Arendelle and as her king’s consort, Kristoff’s rugged blond hair is now slicked back and wears a darker shades of purple royal outfit.

Like i said before, sometimes a great wig can be the key to making a perfect cosplay, so I really hope these wigs above can be helpful when you want play the cosplay on characters in frozen 2. And by the way, if you need one of these wigs, just go to xcoos to get it.