Theses Are the Game Of Thrones Costumes You’re Looking for Game Of Thrones! Winter is coming！Game Of Thrones is pretty much everywhere right now, not that we’re complaining. We’re obviously huge fans. When it’s Halloween, we wear our Game Of Thrones Halloween costumes…and when it’s not Halloween they become regular ol’ Game Of Thrones costumes! We wear them to TV drama premieres and conventions and just because. So get comfortable and we’ll show you all the most popular designs, plus an accessory or three. That’s right, these are the Game Of Thrones Costumes you’re looking for! 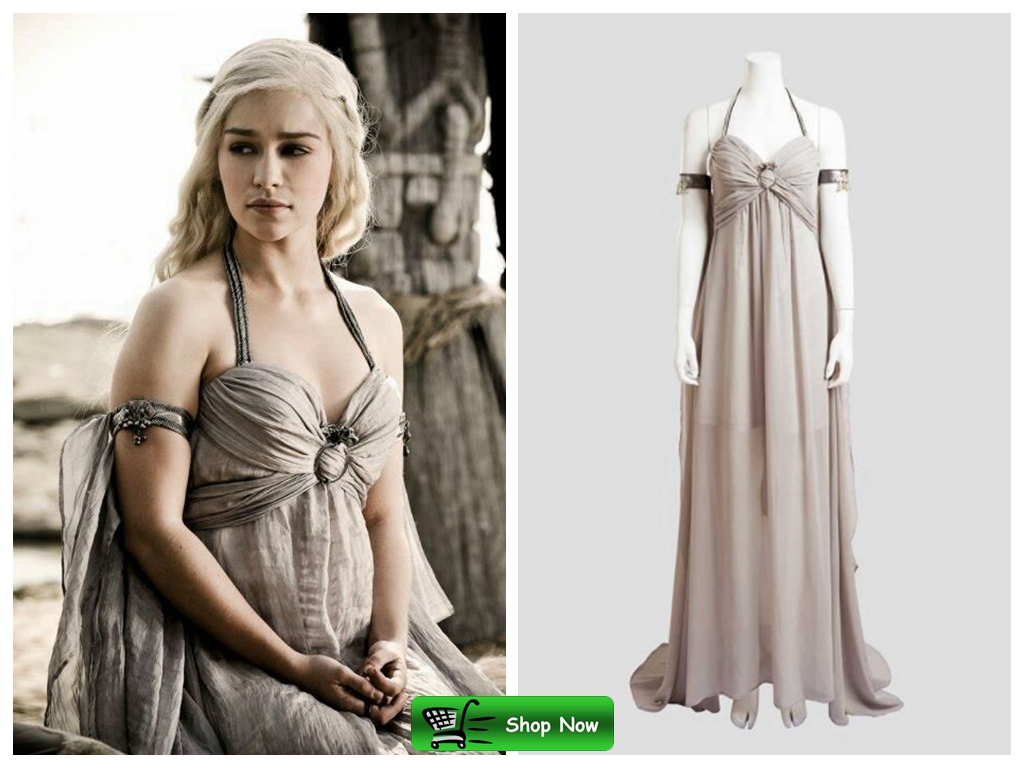 If you’d like to remember better days, when Daenerys was softer, naive, and unaware of the ups and downs of her future, you may wish to dress up in her wedding day costume. When she was handed off to Khal Drogo on that fateful day, Dany wore a dusty mauve dress made from transparent material symbolizing her assumed fragility. This dress from Xcoos is the perfect dupe for Dany’s wedding garb. It even comes with the matching armbands and three-headed dragon brooch (her house’s sigil and a foreshadowing symbol of what’s to come). 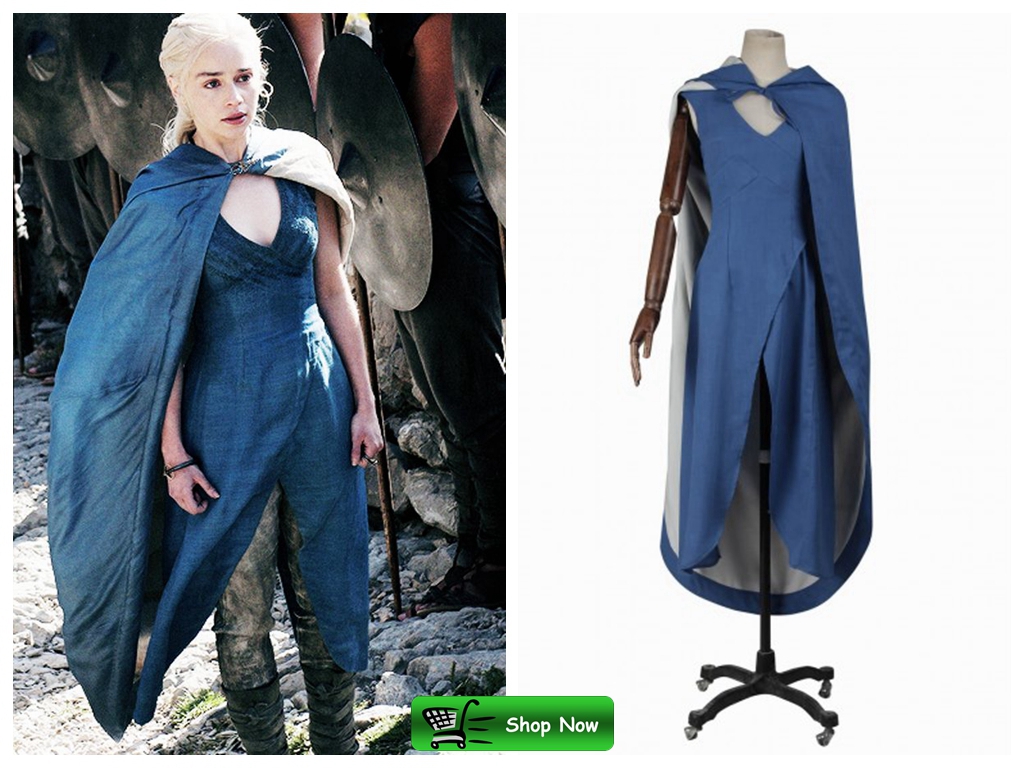 Perhaps you want to jump straight into a badass Daenerys Targaryen costume (we don’t blame you). If that’s the case, you may want to opt for this layered blue-dress-and-riding-pants combo, which Dany wore during Seasons 3 and 4 while she was in the process of gathering her Unsullied army and breaking chains left and right. All it needs is a dragon claw statement necklace, which you can make at home using clay or even cut out of foam and paint it. 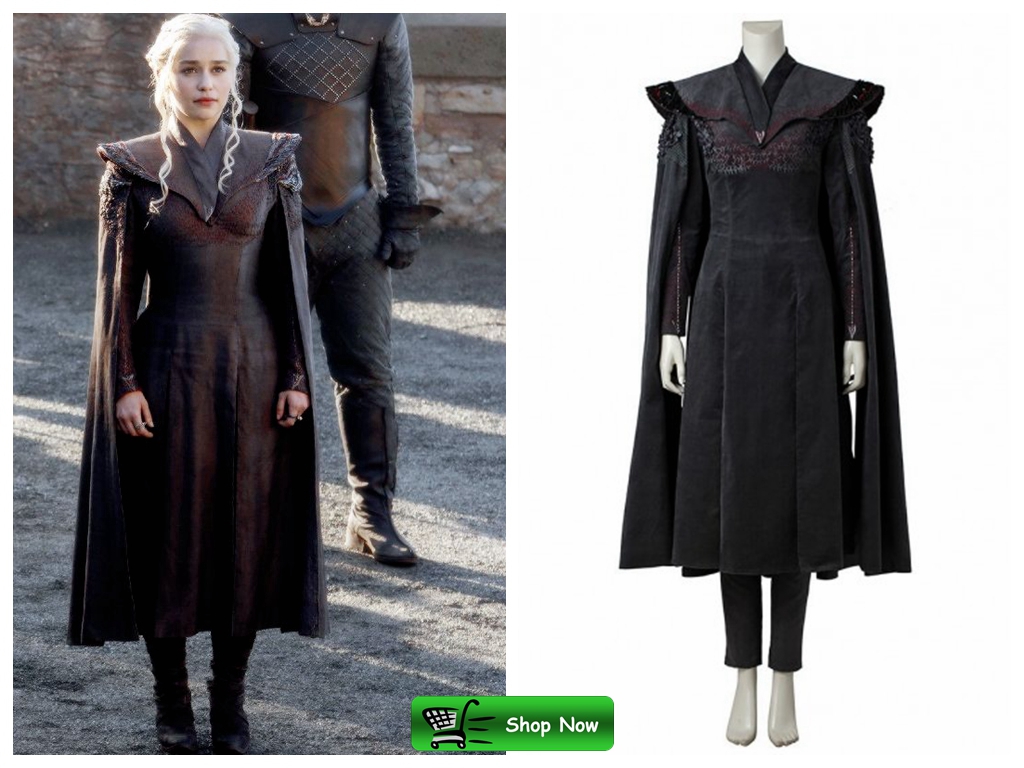 When Dany touched down in Westeros, having forged her alliances with House Tyrell and the Greyjoys, she begins to show some major authority through her sartorial choices. Ditching her airy whites, Dany opted to go all-black and wore clothing with more militaristic silhouettes. This three-piece set is a great dupe for the outfit Khaleesi wore in Season 7 when she felt Westerosi sand in her fingers for the first time. The top shoulder part is also removable, so one can get that deep-V neckline Dany wore on the ship crossing to Dragonstone—basically, this is a two-for-one buy. 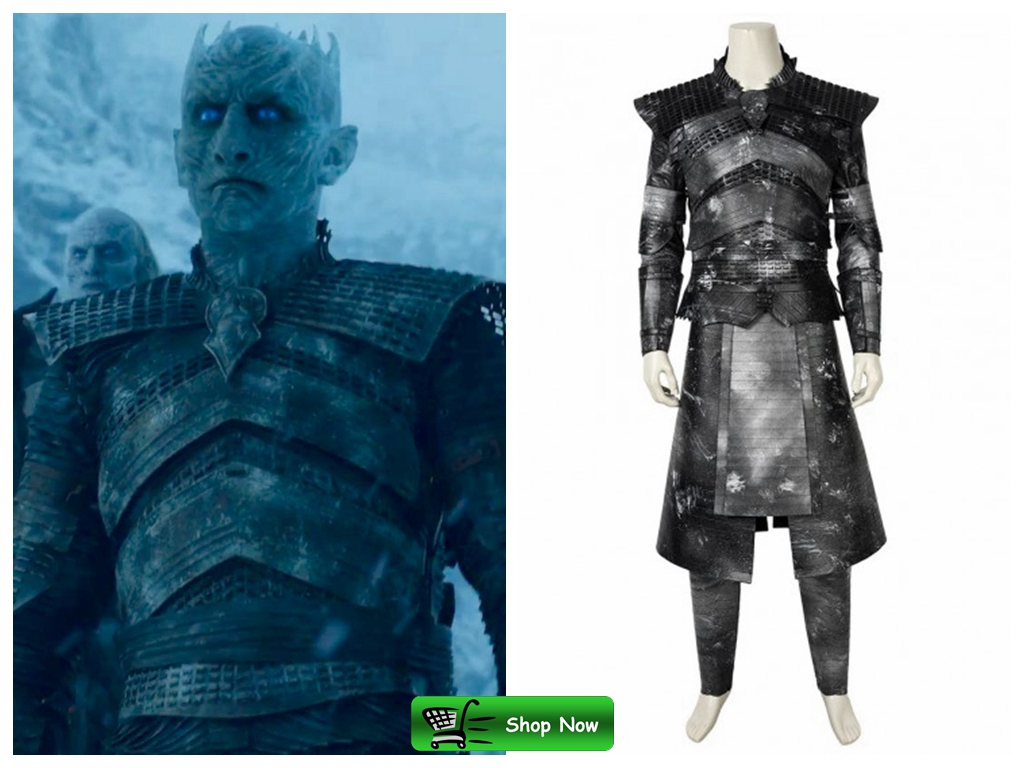 The Night King is the leader and the first of the White Walkers. He has the White Walkers and the Army of the Dead following his orders. He has many supernatural powers and abilities that make him a frightening character and a very difficult to face opponent. Among his powers there are the ability to raise zombies from the dead bodies that were not burned and recruit them into his army. The ability to touch someone and make him into a White Walker. He can break normal steel weapons, resist to fire (even a dragon fire) and more. 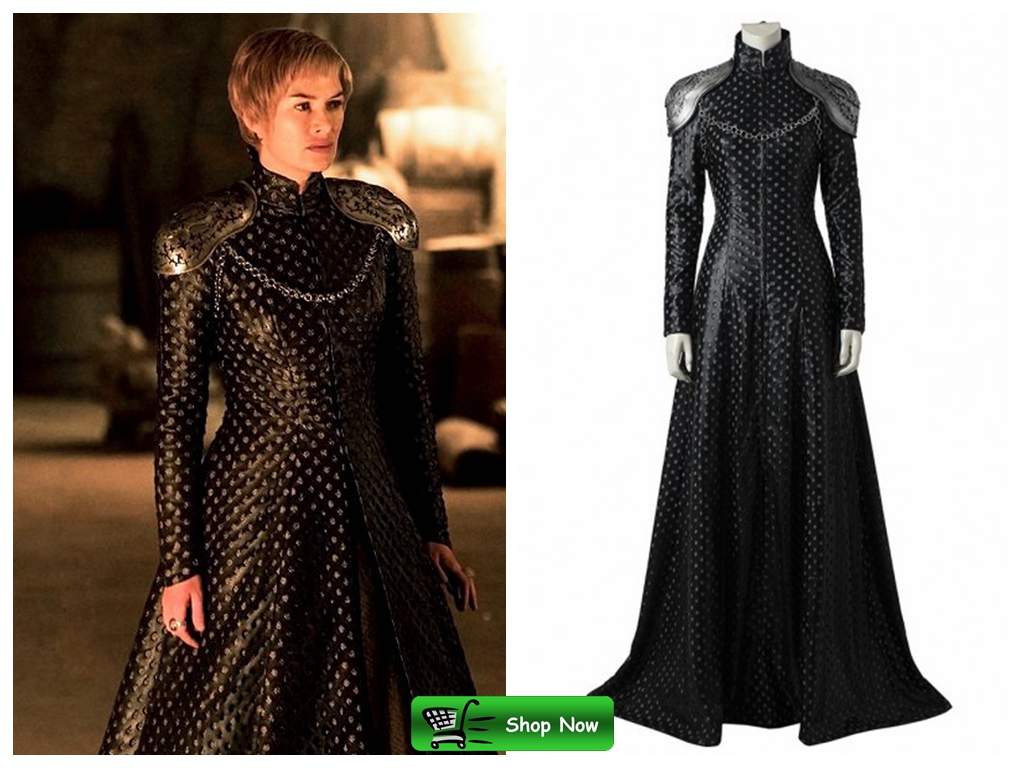 Queen Cersei I Lannister was the twentieth ruler of the Seven Kingdoms and the widow of King Robert Baratheon. She was the daughter of Lord Tywin Lannister, twin sister of Jaime Lannister and elder sister of Tyrion Lannister. She was involved in an incestuous relationship with Jaime, who was secretly the father of her three bastard children, Joffrey, Myrcella and Tommen.

After all her children died, Cersei assumed the throne under the name of Cersei of the House Lannister, the First of Her Name, Queen of the Andals and the First Men, Protector of the Seven Kingdoms, making her the first officially recognized Queen Regnant in the history of Westeros. Her reign came to an abrupt end during the Battle of King’s Landing, where she and Jaime were killed. She was the last monarch to sit on the Iron Throne. 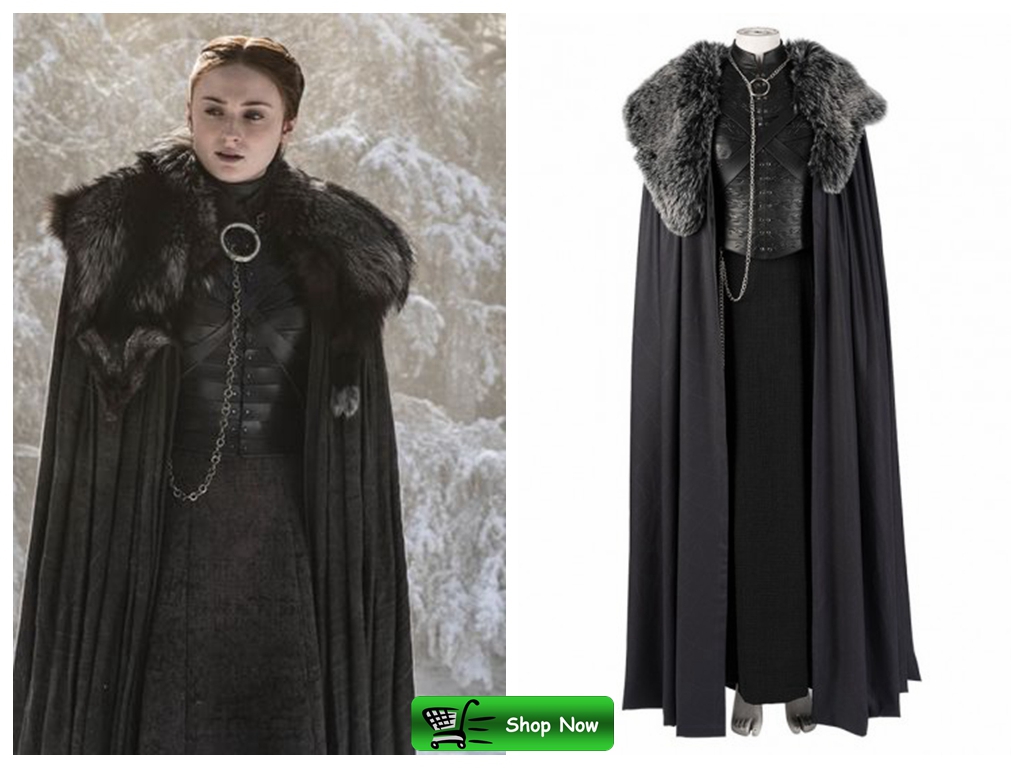 Sansa, played by Sophie Turner, has had the most interesting, if quiet and subtle, character development of anyone in the series. Ned Stark’s older daughter has gone from an innocent but shallow teen with delusions of royalty to a quiet, resolute leader who has survived more horrific things than you can imagine. Through it all, she’s worn her allegiances and defiance quite literally on her sleeves. 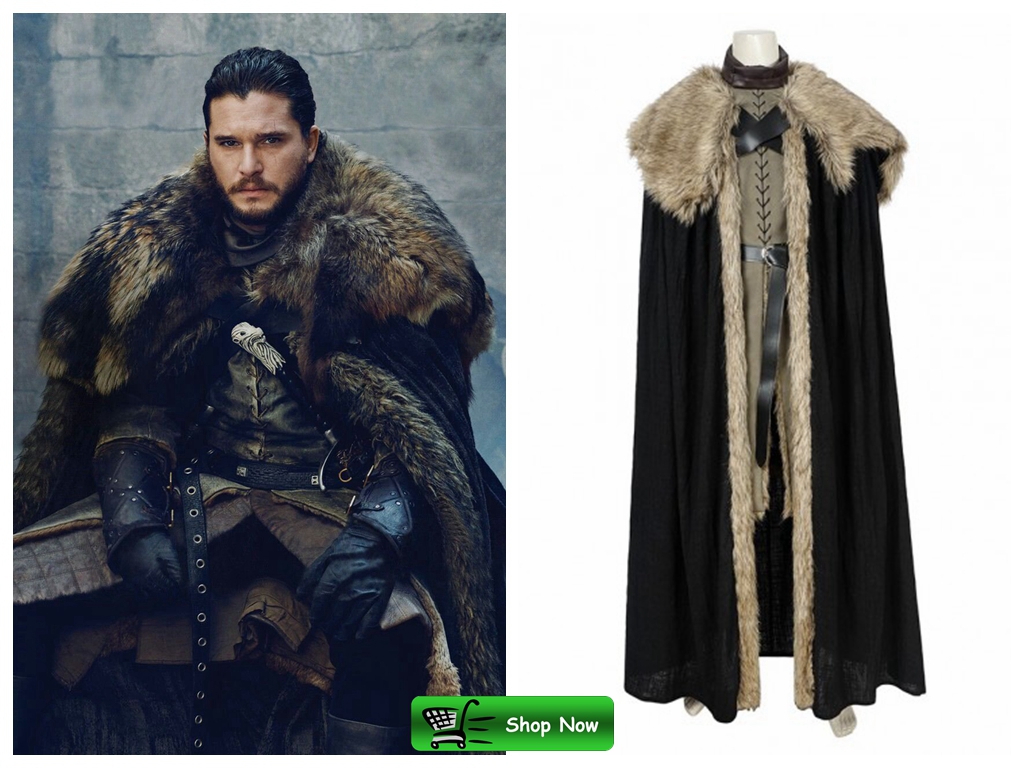 Jon Snow, born Aegon Targaryen, is the son of Lyanna Stark and Rhaegar Targaryen, the late Prince of Dragonstone. From infancy, Jon is presented as the bastard son of Lord Eddard Stark, Lyanna’s brother, and raised alongside his lawful children at Winterfell, the seat of House Stark. However, his true parentage is kept secret from everyone, including Jon himself, in order to protect him from those that sought the complete annihilation of House Targaryen after Robert’s Rebellion and to maintain order in the realm. 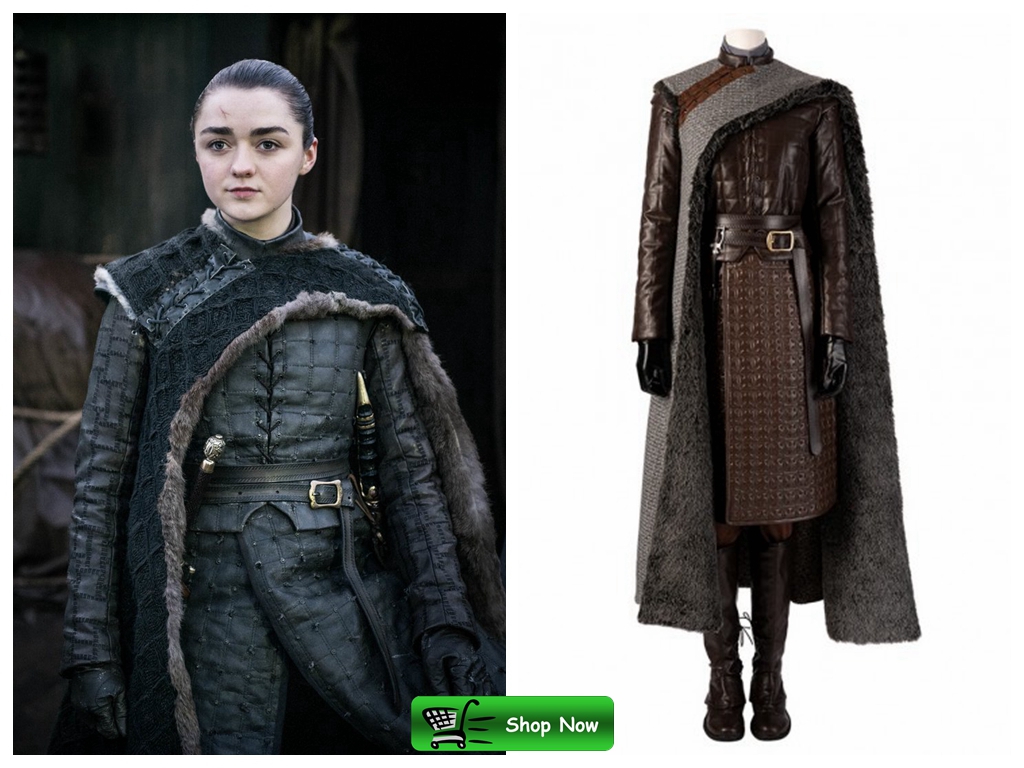 Arya Stark is the youngest daughter and third child of Lady Catelyn and Lord Ned Stark. Arya was born and raised at Winterfell. She has an older sister, Sansa, an older brother Robb, two younger brothers Bran and Rickon Stark, and a “bastard half-brother” Jon Snow. Arya rejects the notion that she must become a lady and marry for influence and power. Instead, she believes that she can forge her own destiny. She is fascinated by warfare and training in the use of arms, and is bored by embroidery and other “lady-like” pursuits. She takes after her father and has a quarrelsome relationship with her sister Sansa, due to their contrasting interests and personalities. She is close to her “half-brother” Jon, who is also something of an outsider.