It’s quite clear that Halloween has been a carnival moment worldwide nowadays. People gathering together, enjoy delicious food, wear costumes with their own styles and have fun. It’s indeed a valuable and memorable time you could go through with your family, friends and lovers. While Halloween 2018 is approaching, whether you have decided who you want to cosplay with your husband or wife for the coming Halloween parties? If not, it’s doesn’t matter. We have reorganized top 15 couple cosplay costumes you can prepare for your Halloween. Just go ahead! 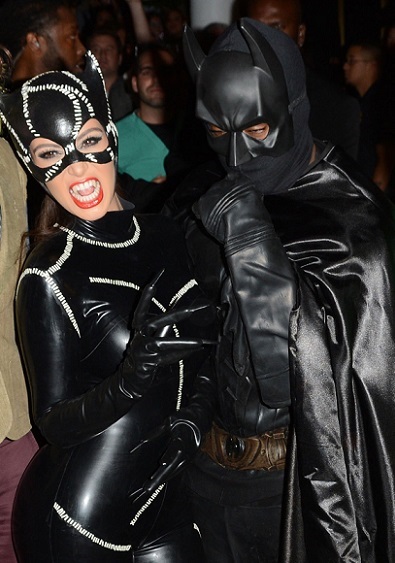 Yes, you read that right. It’s Kim Kardashian and Kanye West who play the role of Catman and Batman respectively in the previous Halloween party. It’s really classical example and causes a sensation at that time. Superheroes are everlasting topics for people in the USA. Therefore you will always see that people make the cosplay of various classical superheroes, especially the Batman, Catwoman cosplay at comic con or Halloween parties. So why not choose the Batman & Catman cosplay with your lovers. 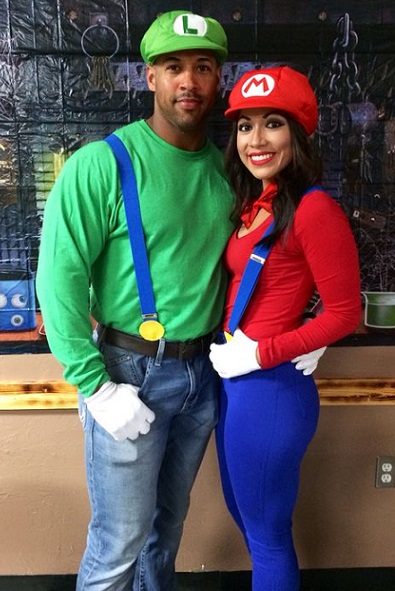 Mario is a fictional character in the Mario video games, owned by Nintendo and created by Japanese video game designer Shigeru Miyamoto. With over 500 million units sold worldwide, Mario is the best-selling video game of all time. When talking about Mario’s appearance, he has a mustache, big nose and always wear a cute hat. And it’s really funny if you try Mario cosplay with your couple wearing different colorful clothes, just like the image shown above. 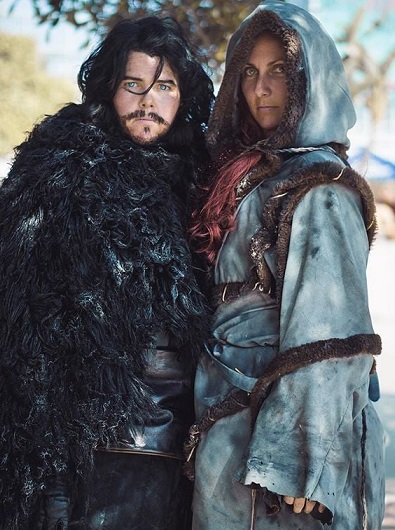 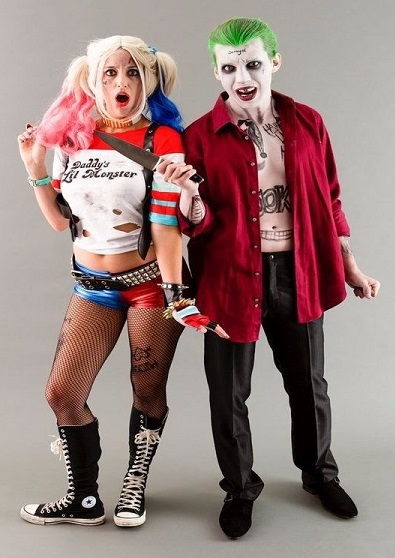 Harley Quinn is originally a fictional character appearing in American comic books published by DC Comics. The character made her live-action feature film debut in the 2016 film Suicide Squad. Then it’s popular all over the world. In reality, Harley Quinn and the Joker cosplay is very simple. You could choose various kinds of Harley Quinn cosplay costumes on Xcoos.com. 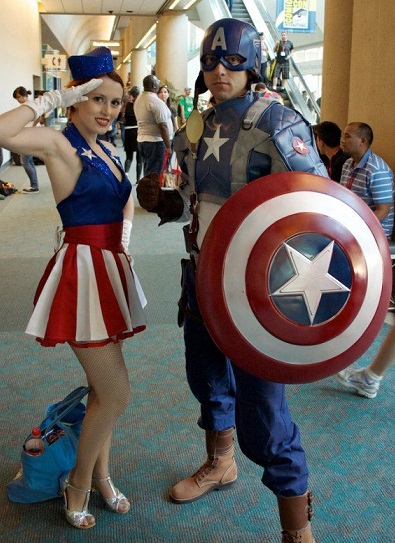 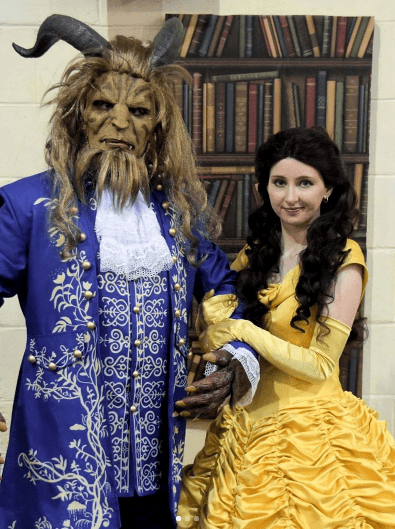 Beauty and the Beast is an American animated musical romantic fantasy film produced by Walt Disney. It tells about a prince who is magically transformed into a monster and his servants into household objects as punishment for his arrogance, and Belle, a young woman whom he imprisons in his castle. To become a prince again, Beast must learn to love Belle. Although it’s a little complex to complete the Beast cosplay, while it’s really worthy to spend time on your makeup for the annual Halloween. 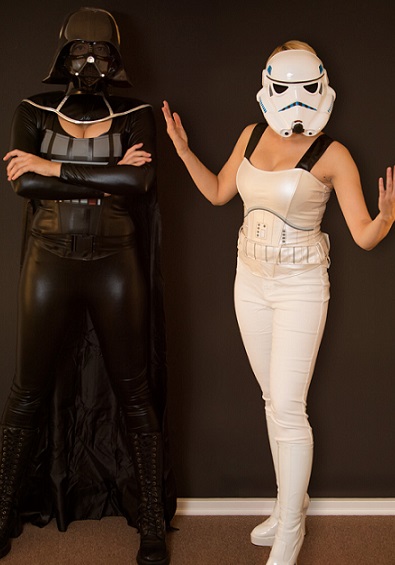 A stormtrooper is a fictional soldier in the Star Wars created by George Lucas. Introduced in Star Wars, the stormtroopers are the main ground force of the Galactic Empire. In The Force Awakens and The Last Jedi, the upgraded stormtroopers serve the First Order. If you like, try Star Wars Stormtrooper cosplay. Of course, there’re other Star Wars characters’ cosplay for your selection, such as Darth Vader, Luke Finn, Rey and more.

Star Wars Series Cosplay Costumes with Up to 20% Discount 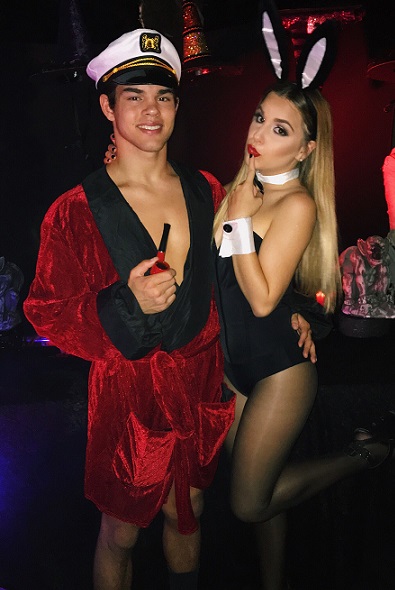 A Playboy Bunny is a waitress at a Playboy Club. Bunnies’ costumes include strapless corset teddy, bunny ears, black pantyhose, a bow tie, a collar, cuffs and a fluffy cottontail. Although Bunny costume is just the waitress’s uniform, it’s followed by more and more people. So you can see the beauty play the role of Bunny in the picture, a little sexy and charming. 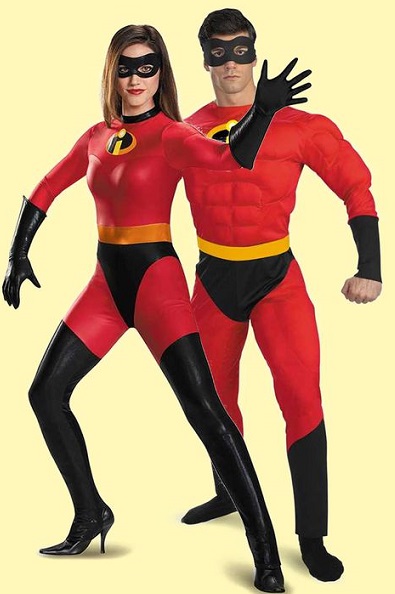 The Incredibles is an American computer-animated superhero film, released by Walt Disney Pictures. The film follows the Parrs, a family of superheroes who is forced to live a quiet suburban life while hiding their powers. Mr. Incredible’s desire to help people draws the entire family into a confrontation with a vengeful fan-turned-foe and his killer robot. A sequel, Incredibles 2, was released on June 15, 2018. It’s just right for you and your couple to make Mr. and Mrs. Incredible cosplay. 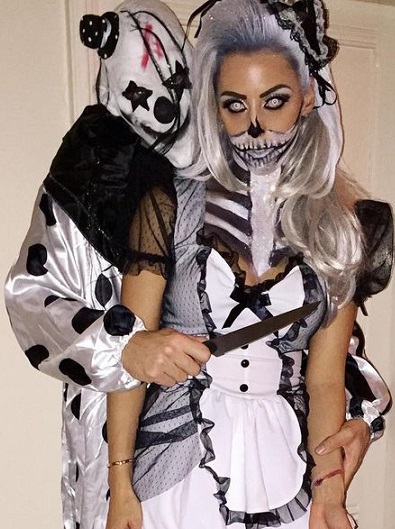 As you know, Halloween is a festival with the horrible and ghastful atmosphere. So there must be some bloodcurdling cosplay choices for your selection, such as the Scary AF cosplay in the picture above. Whether they give you chills when you look at them or not? 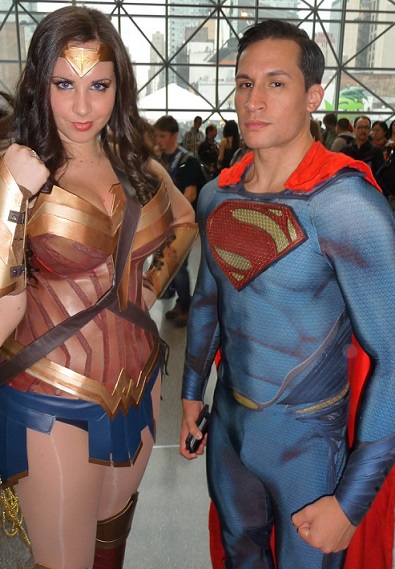 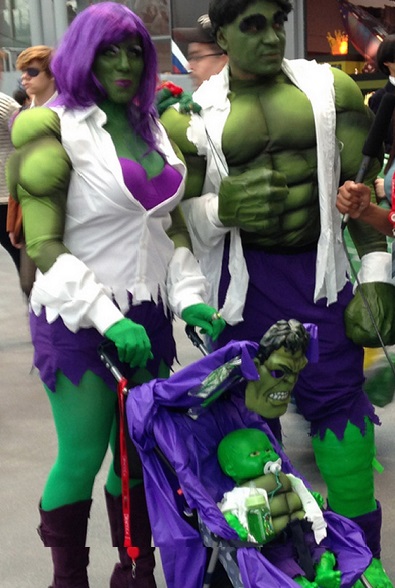 The Hulk is a fictional superhero appearing in American comic books published by Marvel Comics. Created by writer Stan Lee and artist Jack Kirby, the character first appeared in the debut issue of The Incredible Hulk. In his comic book appearances, the character is both the Hulk, a green-skinned, hulking and muscular humanoid. Try Green Giant cosplay, and be the central figure on the Halloween party. 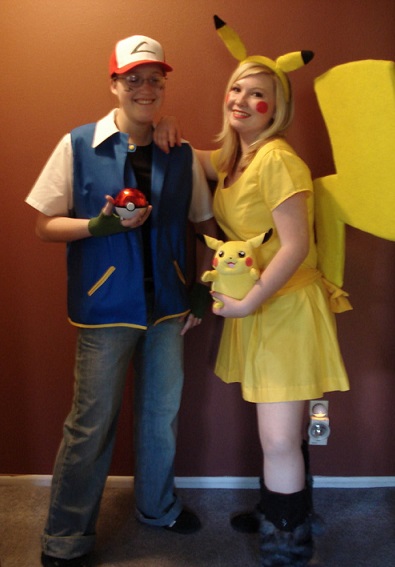 Pikachu is a species of Pokémon, fictional creatures that appear in an assortment of video games, animated television shows and movies, and liked by a number of people around the world. If you like Pokemon Go, try Pikachu with your couple. It’s really cute and full of love. 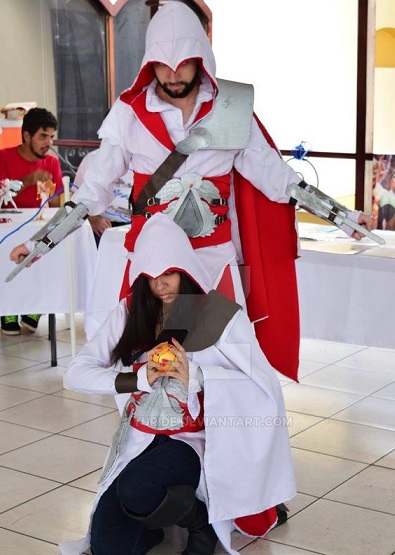 Assassin’s Creed is a franchise centered on an action-adventure video game series developed by Ubisoft. It depicts a centuries-old struggle pitting the Assassins, who fight for peace and free will, against the Templars. You may always see the Assassin Creed series cosplay at different comic cons, so you can see how popular it is. 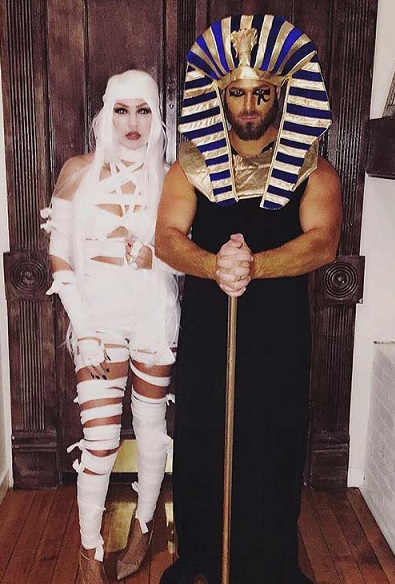 Maybe you have already got some ideas about your Halloween “bling up” after viewing this article. We’ve gathered all the above Halloween couple costume ideas of different styles. Go right now and pull off the best show even on Halloween 2018.