It’s apparent that the blockbuster superhero movie “Black Panther” has already achieve greart success in the global film market, except for its amazing plot, those various and exotic costumes also succeed in attracting attention of many people. And since the movie was released, more and more people began to emulate those characters by wearing the same costume, doing the same pose and so on. All in all, those special costume and unique culture in this movie have already become a plus, which attracts more and more people to come and check it out. So today I will place emphasis on those Black Panther costumes which appeared in this movie, without further ado, let’s get it. 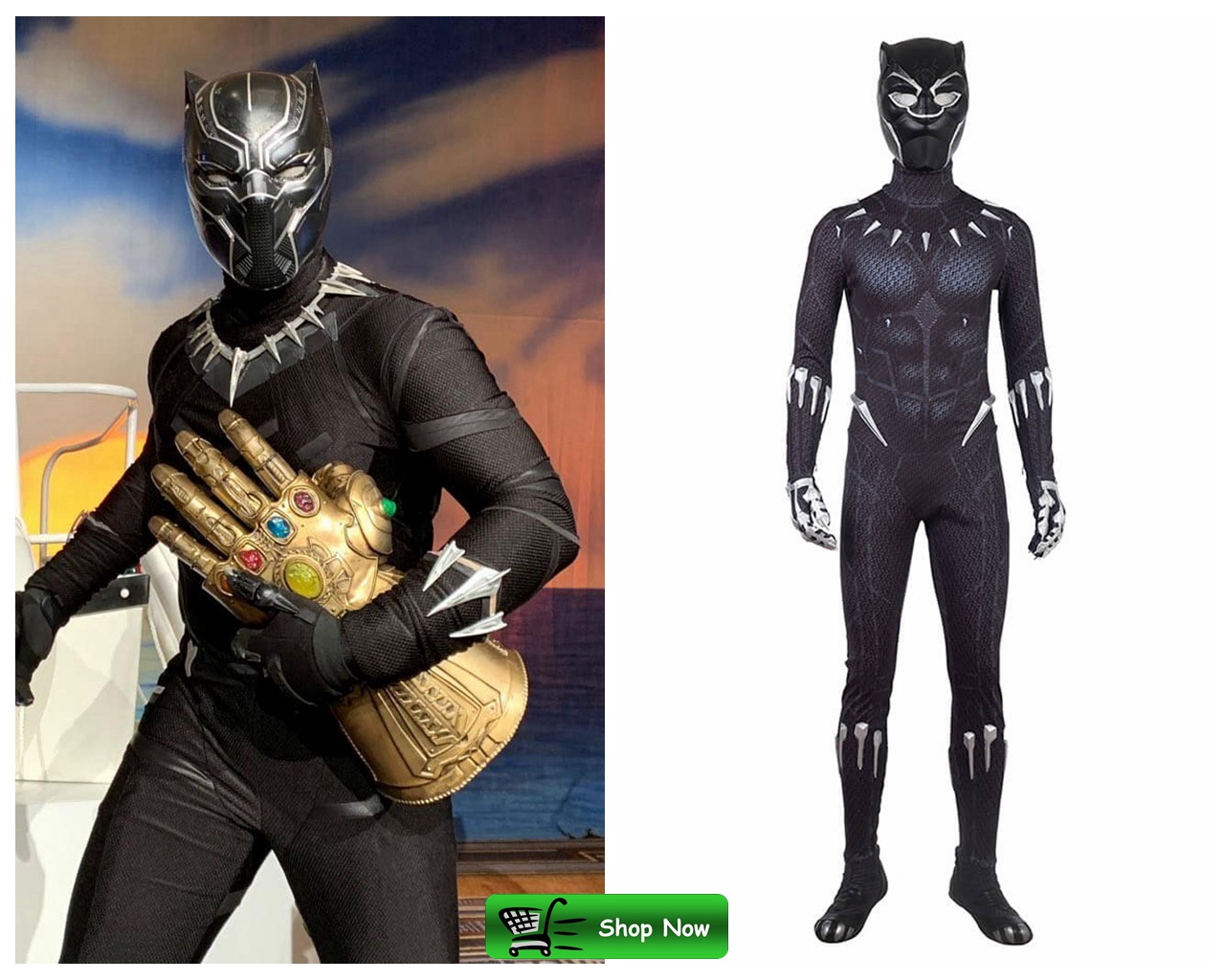 T’Challa is the current King of Wakanda and the son of T’Chaka and Ramonda. As the Wakandan monarch, he is also the holder of the Black Panther mantle. After his father was killed in a bombing attack orchestrated by Helmut Zemo, the new monarch set out to kill the Winter Soldier, who was widely believed to be responsible for the attack. After being drawn into the Avengers Civil War and siding with Iron Man, T’Challa learned the truth about Zemo’s deception and decided to help the Winter Soldier by granting him asylum in Wakanda and helping him get a cure for his HYDRA mental programming. T’Challa was born in Wakanda, an isolationist country located in Africa, to the reigning monarch T’Chaka and his wife Ramonda. He eventually had a younger sister named Shuri. Training for all of his life to take his father’s place as the next Black Panther, T’Challa grew into a man with a highly active mind and despite T’Chaka’s best efforts, a great dislike for politics. 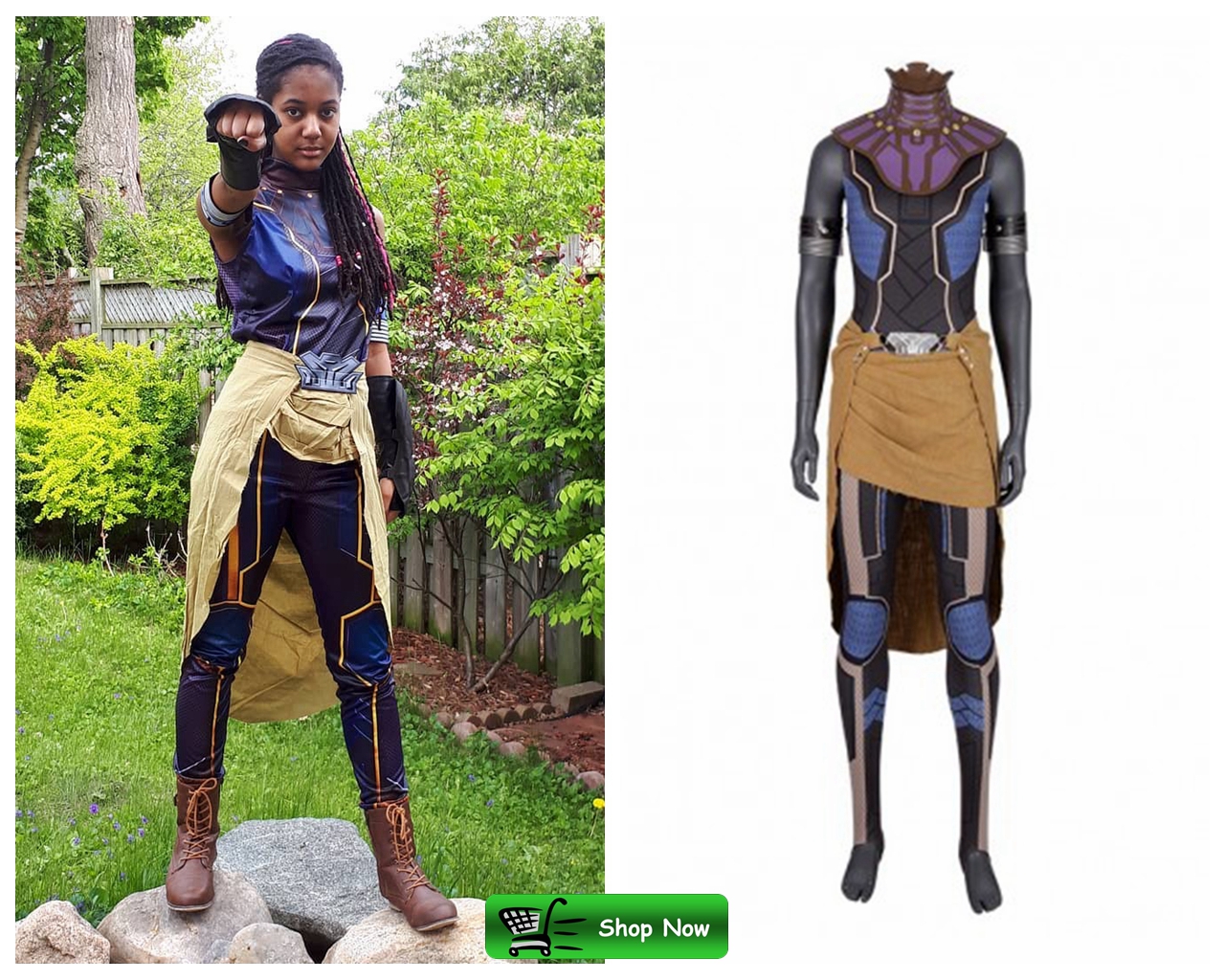 Shuri is the Princess of Wakanda, daughter of T’Chaka and Ramonda, sister of T’Challa, and the leader of the Wakandan Design Group. An innovator responsible for creating much of Wakanda’s modern technology, she is also known for designing the current generation Panther Habits. After her brother’s coronation, Shuri assisted him and the Dora Milaje in tracking down Ulysses Klaue, only to be forced to flee the Golden City as Erik Killmonger overthrew the throne, eventually returning to reclaim Wakanda. Shortly after, Shuri succeeds in eliminating the HYDRA programming from Bucky Barnes’ mind. Two years later, she was tasked by her brother and the Avengers in removing the Mind Stone from Vision’s head to have Wanda Maximoff destroy it, as the android was under threat from Thanos. She was soon compromised by Corvus Glaive, who ambushed her lab and quickly defeated Shuri. Shortly after, she was among the many who died when Thanos completed the Infinity Gauntlet and wiped out half of all life in the universe. She was resurrected by Hulk in 2023, upon which she participated in the Battle of Earth. 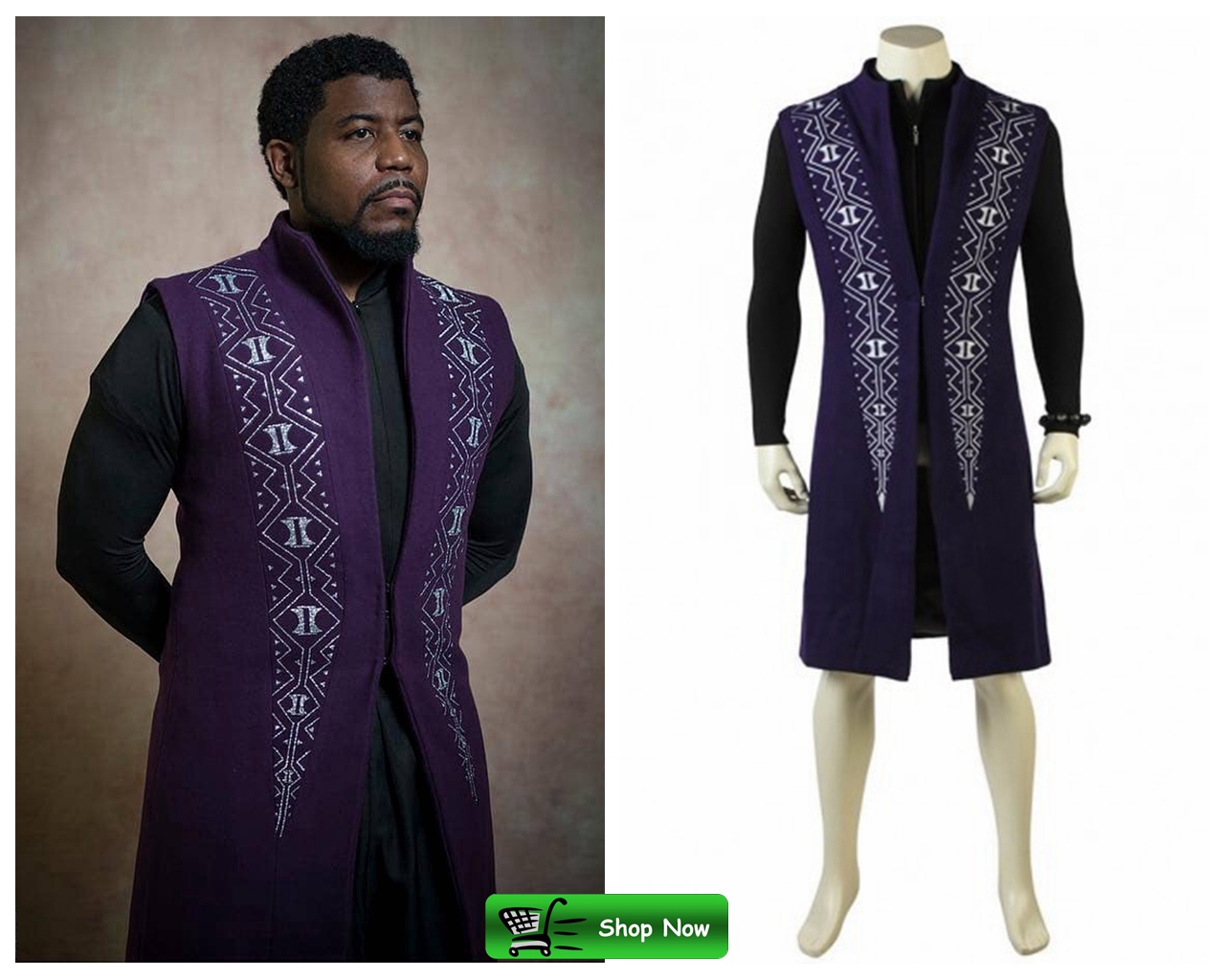 Most of T’Challa’s costumes have some form of cultural significance to them. The purple vest that he wears has a little Nsibidi language on the vest. We painstakingly chose the embroidery pattern with help from Ryan Coogler. T’Challa is polite, respectful, and very caring for the people he is around and who he considers his friends. He is shown to have high respect towards other people, especially towards his father, T’Chaka. He honors the tradition and principles of Wakanda and is willing to take action whenever it is necessary. When his father died, he was willing and ready to take his rightful place as king of Wakanda. While he does not seem to favor fights, he was very quick to try and avenge his father’s death. An honorable fighter, T’Challa respects his opponents and is willing to spare his enemies’ lives. That being said, he is not opposed to killing his opponents in a fight and does not always try to avoid lethal measures of disabling them. Though he mortally injured Erik Killmonger, he still offered him the chance to heal his wounds and even granted his wish to see Wakanda’s sunset before dying. When M’Baku challenged T’Challa for the throne, T’Challa focused on forcing M’Baku to yield rather than trying to kill him. 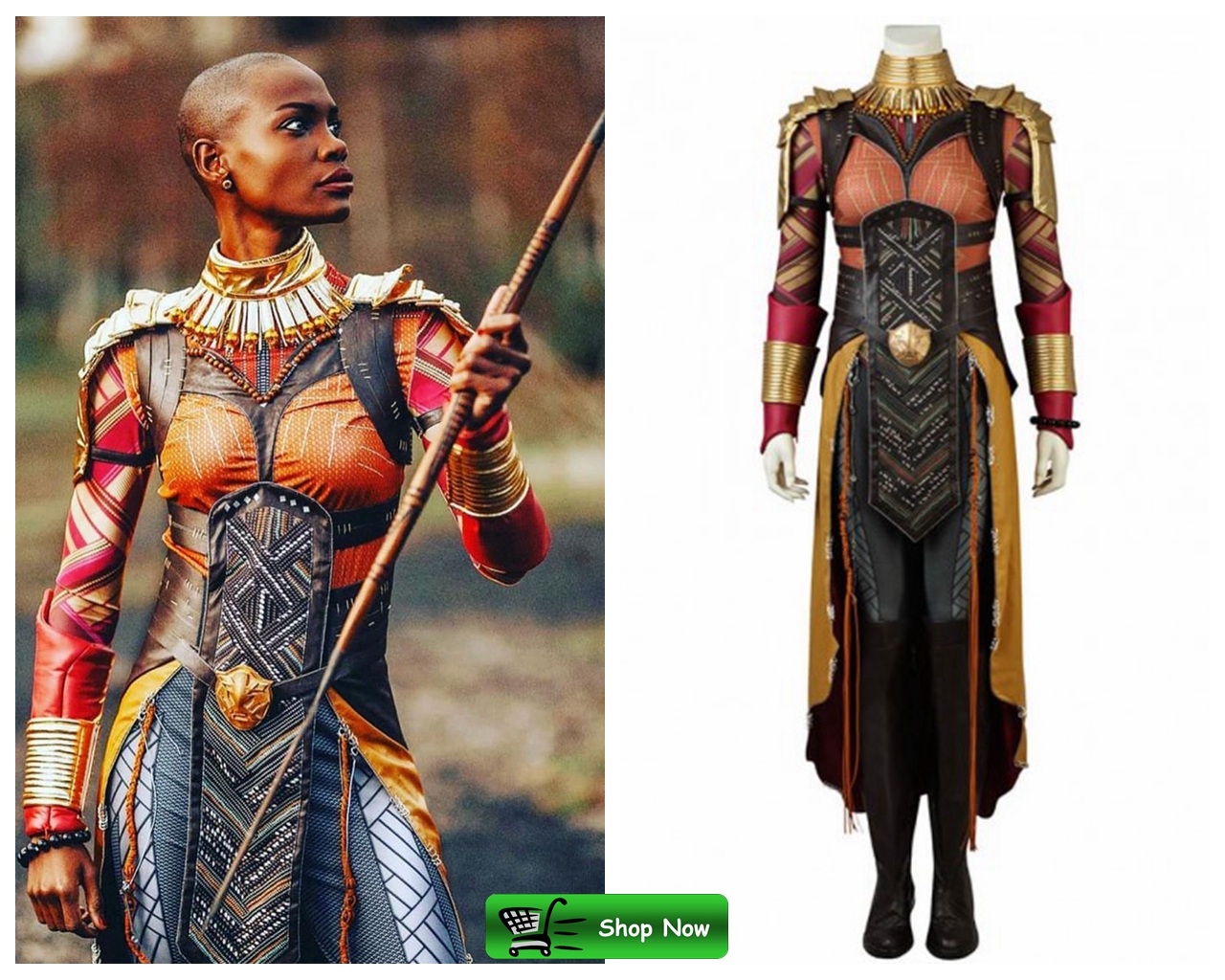 Okoye is the General of the Dora Milaje and the head of Wakandan armed forces and intel. Witnessing T’Challa’s coronation, she joins him in tracking down Ulysses Klaue. After Erik Killmonger overthrew T’Challa, Okoye found herself conflicted between her friendship with T’Challa, or her duty to her new king. T’Challa soon returned and Okoye soon joined him in the fight against Killmonger and successfully taking back the throne. When Thanos and his forces arrived on Earth to forcefully take the Mind Stone from Vision, Okoye soon was forced to defend Wakanda alongside her king and the Avengers. Although they succeeded in killing Thanos’ forces when Thanos himself came on Wakanda, Okoye and the other heroes were completely overpowered and unable to stop him from completing the Infinity Gauntlet, though Okoye remained one of the survivors. 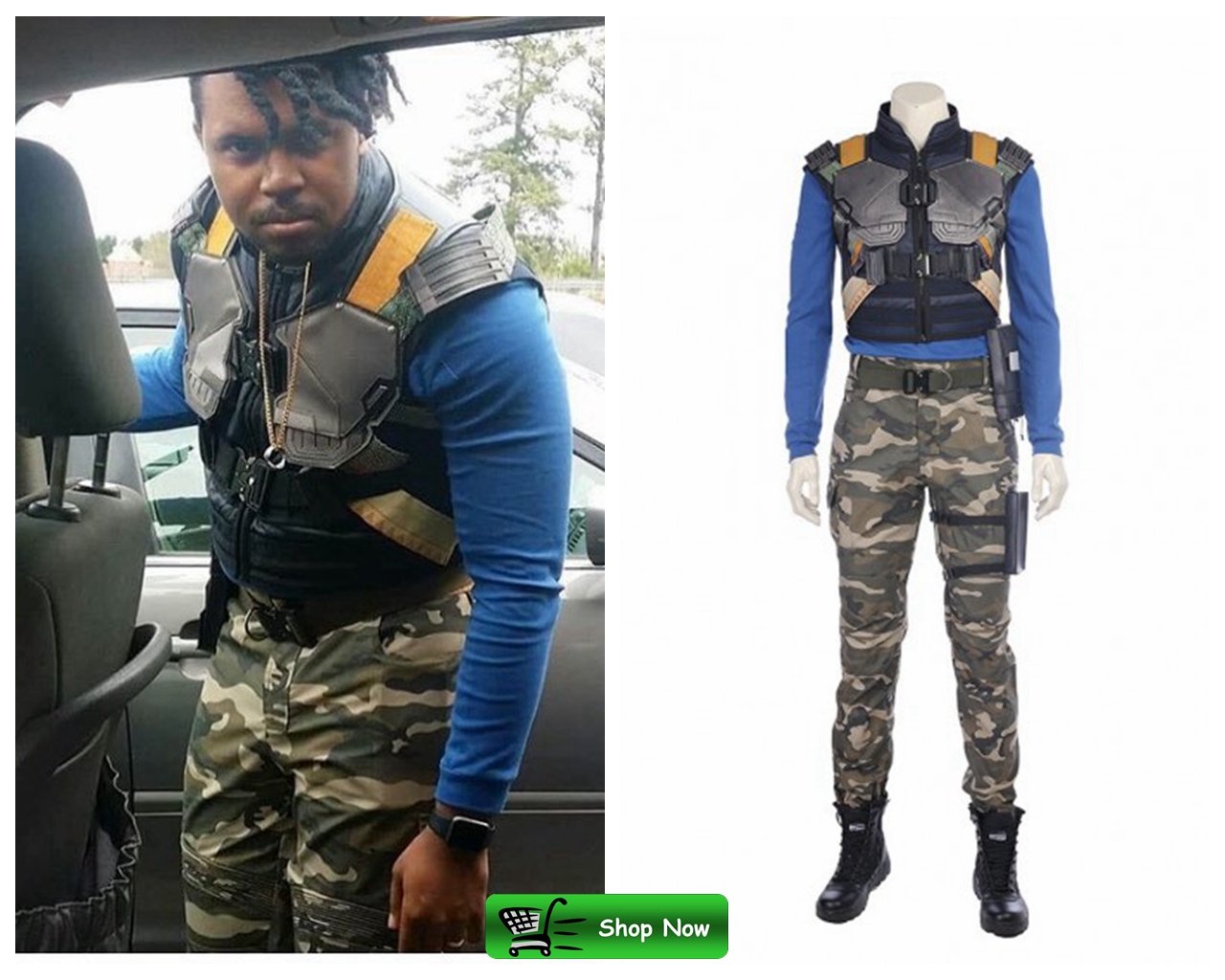 N’Jadaka, also known as Erik Stevens, was a former United States Navy SEAL of Wakandan origin through his father, the Prince N’Jobu. N’Jadaka’s savagery while serving with a U.S. military black-ops unit, earned him the nickname Killmonger. When Killmonger was a child, T’Chaka had killed his father for trying to murder Zuri for outing him after betraying Wakanda. This had then drove Killmonger to dedicate his life to forcibly dethroning his cousin, T’Challa, in order to finally accomplish his father’s plan to seize control of the world by using all of Wakanda’s Vibranium technology to cease the oppression of people of African descent all across the world. Manipulating and then killing Ulysses Klaue to gain his access to the city, Killmonger seemingly killed T’Challa during their ritual combat and claimed the throne. Just before Killmonger unleashed his plans, the Black Panther returned and challenged Killmonger, eventually defeating and killing him during their final battle.